You can run DSL over wet string 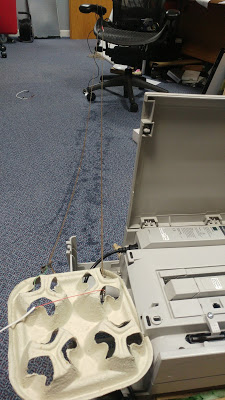 ADSL was a miracle when it debuted, delivering high speeds over old copper, thanks to a protocol that was so adaptable to suboptimal media that it was said it could run "over a piece of wet string."

Some of the network engineers at Andrews and Arnold -- the best ISP in the UK, and my provider when I lived there! -- decided to try it out and it worked (once they'd added some salt to the string to increase its conductivity).

And the result - it works!!! Not even that slow (3½Mb/s down) though slow uplink. Don't dare touch the string though...

So, there you go, ADSL over 2m of literal "wet string". Well done all for testing this. It shows the importance of handling faults that seem to just be "low speed".

As a bonus, fit tin cans to both ends and you get voice as well as broadband on the same wet string!