Famous racist does everyone a favor and dies 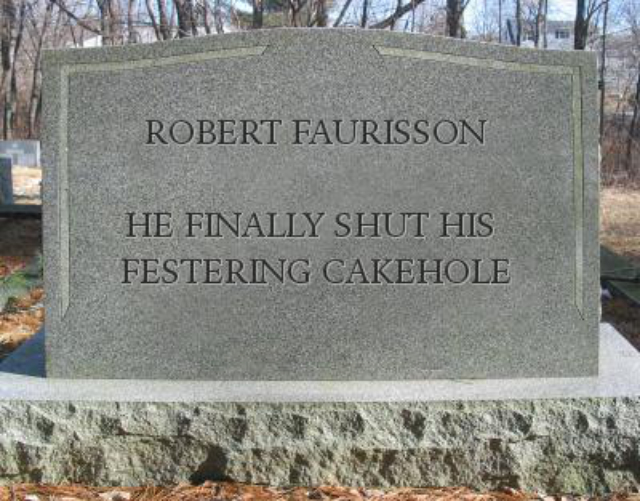 Racists, emboldened by the policies of populist far-right leaning governments, seem to be everywhere these days. They're having rallies, breaking up families at borders and beating folks in the streets. Happily, time is a wheel: as our lives our lessened by the emergence of fresh bigoted bullshit, we're also gifted with what I hope is the incredibly painful passing of those who made it their life's work to spew hate and kindle chaos.

Robert Faurisson, a former literature professor turned anti-Semitic propagandist whose denial of the Holocaust earned him multiple prosecutions, died on Sunday at his home in Vichy, France. He was 89.

Mr. Faurisson was regarded as a father figure by contemporary French exponents of Holocaust denial, the extremist fringe in a country with a long tradition of anti-Semitism. Contemporary far-right figures like the propagandist Alain Soral and Dieudonné, who calls himself a humorist, have followed in his footsteps, but none have had the long-range tenacity of Mr. Faurisson.

At least in death, he might finally be able to contribute to something useful--fertilizing palm trees to provide observant Jews with shelter from the elements during Sukkot, for example.

While things feel as permissive as hell here in North America, the French weren't willing to put up with Faurisson's holocaust denying nonsense. According to The New York Times, he became the first person in France to be convicted for saying that the Holocaust, a crime against humanity, never happened. More recently, the prick was fined 10,000 euros by the French courts for "propounding 'negationism'" in interviews published on the internet."