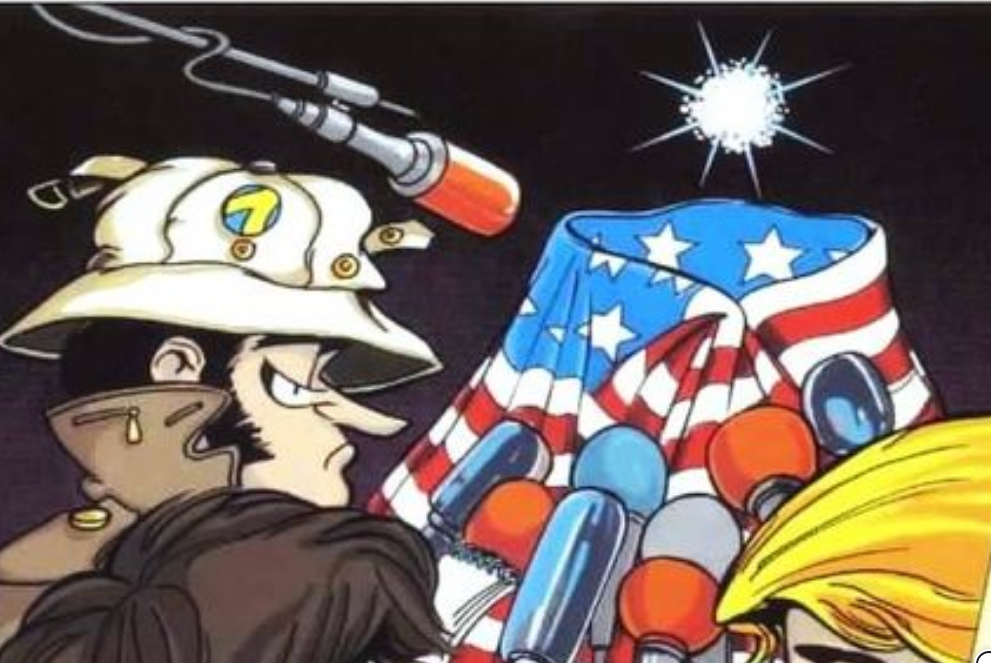 George HW Bush was a mass murderer and a war criminal and now he is dead.

In some ways, Bush I was fated to be a terrible person. His family fortune sprang from his father's willingness to cozy up to Hitler and sell him the steel he needed to re-arm Nazi Germany. As a young man, Bush I distinguished himself by desecrating indigenous graves.


But it was when Bush I's national political career took off in earnest, first as Reagan's VP and then as a presidential hopeful and finally as a one-term, failed president that he began to performatively inflict cruelty upon innocents, lying to the American people, victimizing people both retail and wholesale, all in the service of shaking off his media image as a "wimp."

Matt Taibbi (previously) is in characteristically fine form in tracing the path to dishonor pursued by George Herbert Walker Bush, the petty, spiteful campaigns he waged after being stung by mockery in the panels of Doonesbury (reminding us on the way of the enormous political power Garry Trudeau has quietly wielded down through the years, including the infliction of much-deserved psychic trauma on Trumplethinskin himself). Multiple sources, including George W Bush, have stated that Jeb Bush was so enraged by the toll this mockery took on "Poppy" that he vowed to go to New York City and kick Garry Trudeau's ass.

But Bush I's pricked ego didn't stop at stewing over Garry Trudeau. He and his team entrapped a young Black man into trying to sell crack in front of the White House, merely so he could go on TV and complain about the crack epidemic getting so bad that someone had been arrested for selling crack outside of the White House. The young man, an 18-year-old called Keith Jackson, went to prison for 8 years. Bush I didn't pardon Jackson on the way out: instead, he pardoned the Iran-Contra conspirators who ran huge quantities of cocaine to finance weapons for terrorists and training for murderous death squads.

The hagiography of Bush I before and after his death often compares him favorably to Trump, but the reality is that unless Trump launches a nuclear war, Bush I killed more people than Trump could ever be organized enough to kill, and did so for reasons of petty ego, American exceptionalism, racism and personal gain.

Even within his own party, Bush was still getting it, even after Panama. In 1990, columnist George Will accused the Bush administration of "intellectual and moral flaccidity" and worried about "the sagging of America into a peripheral role abroad."

George Will using the words "flaccid" and "sagging" is about as profane as country club Republicanism used to get. In a later insult, Will's brother-by-another-overused-Thesaurus, William Safire, ripped an insufficiently aggressive Bush address about the collapse of the Soviet Union as the "Chicken Kiev" speech.

Bush then invaded Iraq. In an act of breathtaking pettiness and self-involvement, he chose Newsweek as the venue to explain to Americans why their sons and daughters were being sent to get shot halfway around the world. "Why We Are In The Gulf," was published in November 1990, about 10 months after George Will metaphorically accused him of having a soft penis.

About half-a-year later, the president appeared at the Malibu home of Jerry Weintraub, producer of The Karate Kid. He also played a round of golf that day with his ex-boss Reagan at the Sherwood Country Club, where, as the Times noted, "the tee markers are little brass archers." After the game, he told reporters he was still pissed about the Newsweek thing.

In the end, Bush finally got some pop culture credit for being a mean dirtbag. The Simpsons had him wrestling Homer in a drain pipe, with Bush saying: "If he thinks George Bush will stay out of the sewer, he doesn't know George Bush!"

A Brief History of Everything That Happened Because of George H.W. Bush's Insecurity [Matt Taibbi/Rolling Stone]

Obama brought McKinsey and Co, the giant management consulting firm, into ICE to effect an "organizational transformation," so they were already in place when Trump took office, and as Trump pivoted to concentration camps, McKinsey had some suggestions to save money: cut back on food, medicine and supervision.

"Davos in the Desert" is Saudi Arabia's charm offensive aimed at global financial elites, but its launch last year was marred by its close proximity to the gruesome murder and dismemberment of Saudi journalist Jamal Khashoggi, carried out at the personal behest of Crown Prince Mohammed bin Salman, who styles himself a progressive reformer.