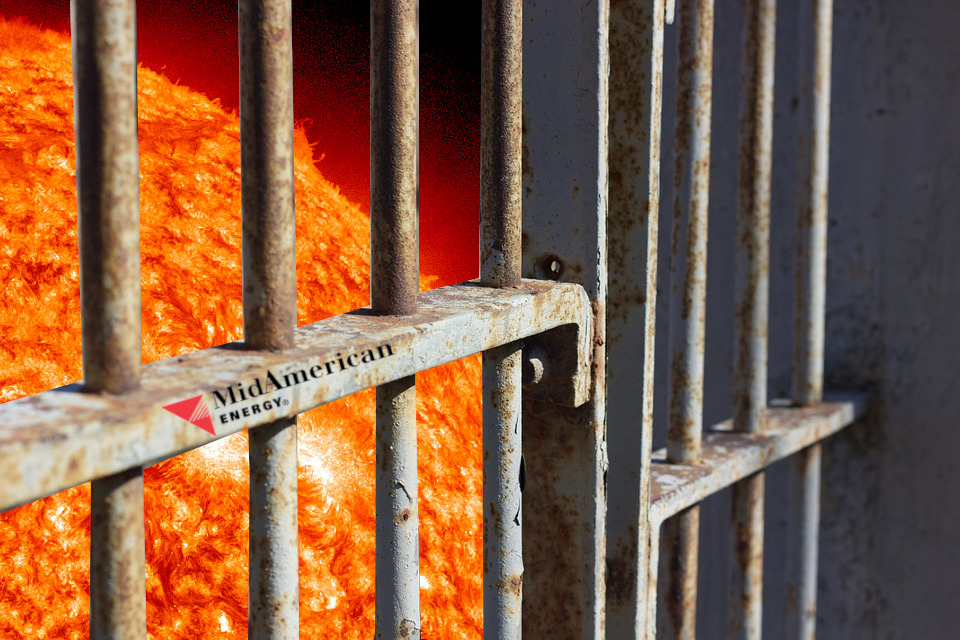 Iowa State Representative Gary Carlson [R-91/gary.carlson@legis.iowa.gov] introduced House Study Bill 185, co-drafted by lobbyists for Midamerican Energy, one of Iowa's regional energy monopolists, with a long history of trying to subvert the "net metering" rules that allow Iowans to put solar panels on their roofs and sell power back into the grid when they are generating more than they are using.

The Midamerican/Carlson bill guts net metering, which will add about $300/year to the power bills of households that install solar panels, using a common anti-solar argument that falsely claims that solar users are more expensive for utilities to service and thus receive a subsidy from households that do not have solar (in reality, part of the installation cost of solar paid by homeowners includes the infrastructure costs to connect to the grid).

Kerri Johannsen from the Iowa Environmental Council called this "a clear attempt to monopolize the sun in Iowa."

MidAmerican’s characterization of the costs of solar to the grid and, in particular, the idea that solar customers are “super-users” is alarming and seems to rely on average Iowans not understanding how the grid works. In fact, the poles and wires that deliver power to our homes are the same ones that deliver power to the grid. Solar customers are not given special or different wires and using the grid in both directions does not put added stress on that equipment. That’s just not how it works. Solar customers also pay for interconnection costs, including any necessary upgrades to the system, up front.

It is very hard to understand how MidAmerican believes it can justify increasing rates for solar customers by over $300 per year when these customers are already contributing their fair share of costs through the high-value electricity they are delivering to their neighbors. Electricity flows from where it is produced to where it is needed, taking the shortest possible path to get there. When solar customers produce more energy than they need, they are supplying power to their neighbors, power that would have otherwise been supplied by the utilities with all the associated generation and transmission costs. And they are providing that energy when it is needed most, during expensive peak hours. In fact, MidAmerican charges residential customers on a time-of-use rate 21 cents per kWh during their peak summer hours. Most solar customers “cash in” those credits for off-peak energy valued at 10.5 cents per kWh. That is a big difference in value with the utility coming out ahead.

Finally, this bill is not necessary to allow for utility solar development as MidAmerican claims. They have the ability to file with the Iowa Utilities Board at any time a request for advanced ratemaking principals for a solar project and, in fact, we would welcome that. We think more solar is better. However, we are certain that this bill is not about expanding solar. We encourage Iowans to take MidAmerican’s talking points with a grain of salt. At the end of the day, MidAmerican is a monopoly, interested in protecting its monopoly status. We cannot allow MidAmerican a monopoly on the sun.