Scientists: hot pavement will burn you like something hot 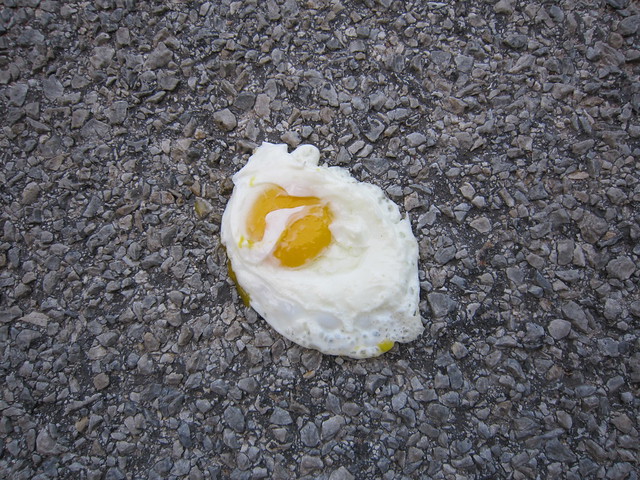 Dehydration. Sun stroke. Quickly standing up from a vinyl chair whilst wearing shorts. There's lots of danger to be found on a scorching hot summer day. According to a team of Doctors from the University of Nevada, we can add another warm weather peril to the list: hot asphalt.

The researchers, who published their study this April in the Journal of Burn Care and Research, took a look at cases from their own university’s burn center unit. Over a five-year span, they found 173 reported pavement-related burn cases. By cross-referencing the day’s recorded weather with the date of these cases, the authors also found that the vast majority (88 percent) happened when it was at least 95 degrees Fahrenheit outside. And once it was over 105 degrees, the risk of pavement burn got exponentially higher.

While these cases might represent only a small portion of burn injuries that warrant medical attention, the authors say they’re an ever-present worry in areas where the climate is constantly hot and sunny, like the Las Vegas desert.

If you're skeptical, ywhy not conduct a little field research of your own? On an insanely hot day, take off your shoes on your front lawn. Now, walk from the grass onto the sidewalk and on into the street. Stand there for five minutes. Feel that burn? Congratulations, you're now a scientist. The University of Nevada will no doubt be eager to hear all about your findings/blistered skin. As the study is quick to point out, pavement can grow hot enough to cause a second-degree burn to skin that comes into contact with it, in seconds.

The study goes on to say that the folks most likely to feel the burn from a romp on the pavement include demographics such as motorcyclists, disabled individuals and the elderly—the latter two of which being more likely to see a burn due to mobility and balance issues. So, watch out for that. More than this, remember to mind small kids and pets: they don't have the sense to stay away from pavement during a heatwave.