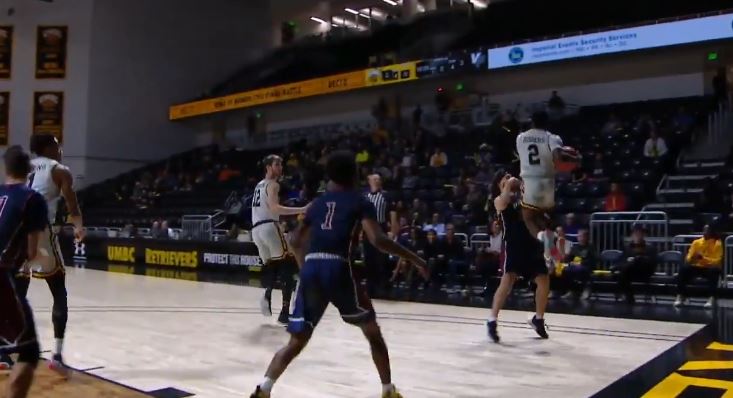 Darnell Rogers, listed at 5'2", 150 pounds, is starring for the University of Maryland, Baltimore County Chesapeake Bay Retrievers. Here he is driving to the hoop against LSU:

Darnell Rogers is 5'2 and he was getting BUCKETS against LSU. ? pic.twitter.com/5msbCgtCme

Getting lost in a forest of trees and exchanging words:

Former Eagle @darnellrogers_3 spoiled FGCU's home opener as he poured in 21 points to tie for a game high in a homecoming of his own. Coach Fly had nice things to say about Darnell post game. Full FGCU/UMBC highlights coming up in minutes on @ABC7SWFL pic.twitter.com/ntOCgZD3mS

And looking like he's jumping off a trampoline as he pulls down a rebound:

Astoria Bowl is a something of landmark in the Queens borough of New York City, a struggling business inside a massive building where time has seemingly stopped. Turtle Down Films created this lovely short documentary (shot before COVID-19) about this "anachronism, a vestige of the sport's mid-century heyday era… an oasis in the truest sense […]

The Washington Redskins will "retire" its name today, according to a report in Sports Business Daily. Its owners long declared their intention to keep the racist moniker irrespective of criticism, but this summer's widespread unrest over police violence rattled the team's advertisers and sponsors, who in turn liquefied the ground under their feet. The move […]