Boing Boing editor and partner David Pescovitz has an op-ed up at CNN about the Voyager probe's golden record. Even in the cold and distant darkness of space, this exemplar of human culture plays on.

It's a story of our planet expressed in sounds, images, and science: Earth's greatest music from myriad peoples and eras, from Bach and Blind Willie Johnson to Benin percussion to Solomon Island panpipes. Natural sounds — birds, a train, a baby's cry, a kiss — are collaged into a lovely audio poem called "Sounds of Earth." There are spoken greetings in dozens of human languages— and one whale language — and more than 100 images encoded in analog that depict who, and what, we are. A diagram on the aluminum cover of the record explains how to play it and where it came from.

As an objet d'art and design, the Voyager Record represents deep insights about communication, context, and the power of media. In the realm of science, it raises fundamental questions about our place in the universe.

Pesco helped Kickstart a re-issue of the disc; you can still get in line and pre-order one here. Read the rest 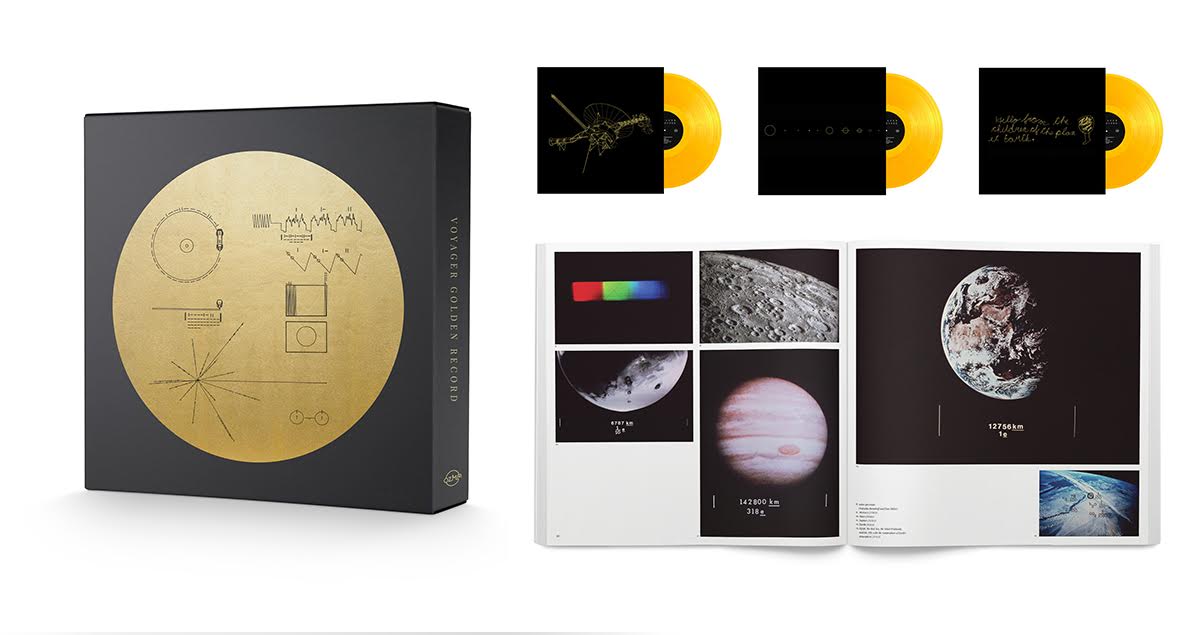 Forty years ago this month, NASA launched two spacecraft, Voyager 1 and 2, on a grand tour of the solar system and beyond, into the mysteries of interstellar space. Mounted to each spacecraft is a golden phonograph record, a message to introduce our civilization to extraterrestrials, perhaps billions of years from now. The Voyager Golden Record tells a story of our planet expressed in sounds, images, and science. The Voyager Golden Record is a gift from humanity to the cosmos, but it’s also a gift to humanity. It lies at the intersection of science and art to spark the imagination, and delivers a dose of hope that so many of us are jonesing for these days. Two years ago, my friends Timothy Daly, Lawrence Azerrad, and I embarked on a long journey to release the Voyager Golden Record as a box set of vinyl LPs so those on Earth can hear it as it was meant to be played. We were humbled by the incredible support our project received. (You can read about our experience in the project updates here.)

Ten months after our Kickstarter ended, the enthusiasm and excitement around the Voyager anniversary and the golden record continues to increase. We feel very fortunate that the story of this historical artifact resonates with so many people! As promised, we will never reproduce the Kickstarter "40th Anniversary Edition" box set again. Our Kickstarter backers took the journey with us and we are deeply grateful. However, for those who were not able to participate in the Kickstarter, we have decided to repress the Voyager Golden Record in a different edition than the one our Kickstarter backers will receive. Read the rest

Right now, The Voyager Golden Record, containing a message from Earth for any extraterrestrials that might encounter it, is traveling on two spacecraft through the cosmic ocean at almost 40,000 miles per hour. But as we approach the 40th anniversary of Voyager, that beautiful gold phonograph record is also barreling through popular consciousness! Last week, I launched a Kickstarter with two friends, Timothy Daly and Lawrence Azerrad, to release the Voyager Golden Record on vinyl for the first time. We are blown away and humbled by the support our project has received!

While we were secretly developing our project, the good people at Pop-Up Magazine, California Sunday Magazine, and NoisePop were also quietly orchestrating their own homage to that magnificent golden artifact! The Golden State Record, taking place this Friday (9/30) at Berkeley's Greek Theater is an exquisitely-curated performance of "stories and sounds of California and the West from some of our favorite musicians, writers, filmmakers, radio producers, and artists." (We only found out about each others' efforts in July!)

I'll be there enjoying the scene under the stars.