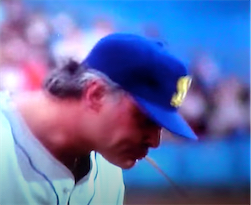 Major League Baseball announced its new rules driven by COVID-19 health and safety requirements. Notably, spitting is banned! I'd imagine that this will be tough to enforce—spitting in baseball is as American as, well, baseball.

• Spitting is prohibited (including but not limited to, saliva, sunflower seeds or peanut shells, or tobacco) at all times in Club facilities (including on the field). Chewing gum is permitted.

It's also a good thing the spitball was outlawed in 1920.

That said, the new rules also state that, "Pitchers may carry a small wet rag in their back pocket to be used for moisture in lieu of licking their fingers." Read the rest

This fish hunts by spitting water at its prey

The Archerfish of Southeast Asia and Australia spit at perched insects to knock them into the water for an easy meal. From KQED's "Deep Look":

“When the fish fires the shot,” (Wake Forest University biologist Morgan) Burnett explained, citing the work of other researchers in Germany who first used high-speed cameras to observe the projectiles in 2014, “the water leaves the mouth as essentially a very long stream. But during flight, the stream merges into a ball.”

The fish accomplishes this feat of timing through deliberate control of its highly-evolved mouthparts, in particular its lips, which act like an adjustable hose that can expand and contract while releasing the water.