I didn't like shooting games. Then I fell in love with Splatoon 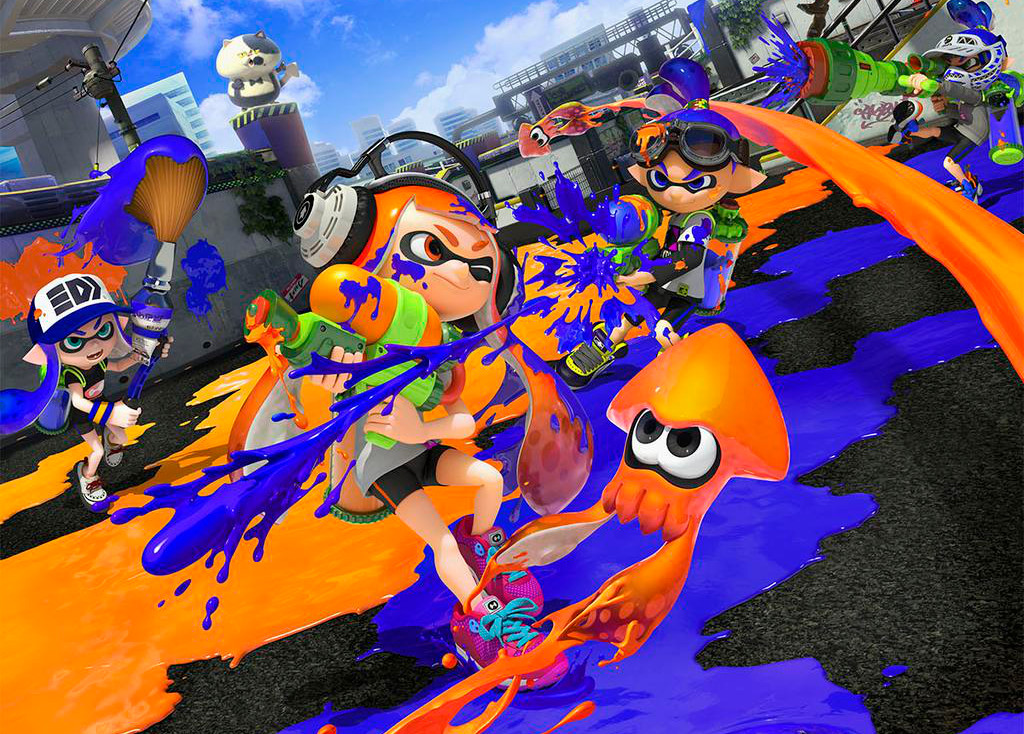 I didn't like shooting games. Then I fell in love with Splatoon

I grew up playing a lot of classic shooting games, like Doom, Quake, Half-Life and Counterstrike. But somewhere along the way I grew weary of the repetition, the point-and-kill gameplay and the hostile online cultures that surrounded them. Call of Duty, Modern Combat, Warface—all of them started to blend together into one forbidding, beige-gray murderscape.

Enter Splatoon: the Wizard of Oz moment where a shooting game finally burst into glorious technicolor, and suddenly everything looked different.

The premise is as simple as it is weird: You're a kid, but you're also a squid, sometimes known as an Inkling. You can play as a girl or a boy, but trust me—the girl looks way cooler. Instead of bullets, your weapon of choice is colored ink; while you can "splat" your foes and send them back to their home bases, your goal isn't actually killing people. Instead, you're trying to paint as much of the level as possible with your team's color, using a wide array of paint guns and projectiles. Of course, the opposing team is trying to do the exact same thing, and that's where things get messy and fun.

When you transform into a squid, the level opens up in a totally different way; you can surf across the level at high speeds anywhere that your team has spilled its particular shade of ink, turning your brushstrokes into a cephalopod fast lane that can shoot you up walls and off ramps. It's a game that feels like a cross between a paintball fight and a waterslide, and is exactly as fun as that sounds.

A retro '80s and '90s vibe reverberates through the game, evoking both the bright, slime-time fun of Double Dare and the bizarro cool of Toejam and Earl.

Splatoon seems oddly determined to single-handedly resurrect the word "fresh" from the neon grave of the Nickelodeon era. Rather than just anachronistic jargon, "freshness" is an actual indicator of your level, and the stores where you buy your weapons (and your legitimately stylish clothing) won't hesitate to toss you on the street for not being "fresh enough."

In any other game, this sort of dad-hipness might doom it to condescension, but Splatoon's earnestness and absurdity takes it so far it almost comes back around to being cool again. It's kind of amazing how quickly you can buy into something when it aims so earnestly for wide-eyed silliness; it didn't take long before I found myself yelling things like, "I think I made it to the next level of freshness!" without a hint of irony.

After all, in a game where you buy sneakers from a potentially self-immolated shrimp tempura named Crusty Sean and everyone speaks in an Animal Crossing mumble, why shouldn't your squid kids call things fresh?

At their core, shooting games are about something very simple: making lines intersect with objects. This act takes on a different tenor when every line is a bullet, and every object is a human body. Given enough time, the idea of shooting games as entertainment—and particularly the militaristic and most popular ones—inevitably spirals towards the gravity of an uncomfortable question: should killing people really be fun?

The last shooter I truly loved was Goldeneye 007, which incidentally had a paintball mode. In retrospect, it was an oddly dissonant experience: the weapon you carried still looked like a machine gun, and the nameless enemy agents you mowed down still looked like they were being shot to death, but when your bullets went astray, they speckled the walls like candy-colored bloodspatter.

For the most part, shooting games have grappled with their moral weight either by embracing the thrill of mindless abandon or adopting an awkward self-awareness, attempting to wrap more "sophisticated" stories around the mechanic of killing sprees, and draping the unwieldy mannequin of mass murder with a more flattering (or 'meaningful') silhouette. These trappings tend to result in the narrative version of Goldeneye's paintball mode: a superficial gloss at best.

Although the last decade and a half has produced some novel takes on the genre like Half-Life and Bioshock, by and large the modern shooting game remains locked in a Live, Die, Repeat purgatory where heavily armed, square-jawed white men and indistinct armored figures circle each other in endless, contrived death spirals that always claim to be different, but are always the same.

Shooters make billions of dollars every year; they are very popular. And isn't that always the catch-22 of popular entertainment: the desire to claim that you are delivering something risky and wholly new, while delivering the safeness and sameness you know everyone already likes—the sequel with all the characters you love that will be like nothing you have ever seen before.

It's pretty much always a lie. But Splatoon is the truth.

There's a lack of viciousness in Splatoon that feels especially refreshing, a conscious effort not only to encourage fun, but to discourage animosity. It's a value reflected both in the look and feel of the game, and in its most basic interactions: success is ultimately measured in your color's total surface area, not "kills."

If you're playing online with strangers, you're automatically sorted into two groups of four on four, but after each match the players who continue are sorted again into completely new teams. It's kind of hard to develop a vendetta against anyone when the guy who was kicking your ass suddenly becomes your teammate. And when you do get "splatted," the message that pops on screen doesn't focus on the name of the person who killed you but rather weapon they used to wipe you out. Especially in the early going, my first reaction wasn't "screw you!" but "hey, I want one of those!"

For women interested in online gaming, the horrific abuse that often greets the mere sound of a female voice is its own separate gauntlet, but since Nintendo's Miiverse mercifully forbids voice chat, this is blissfully absent.

Instead, the primary way to interact with your fellow players is by drawing and sharing heavily moderated art and messages in communal spaces, which can range from Spongebob Squarepants and 50 Shades of Grey jokes to to surprisingly poignant messages in a bottle.

Despite all its hyperkinetic, free-for-all action, there's also something unexpectedly soothing about Splatoon, and the coloring-book pleasure you get from filling in its spaces with slick strokes of hot pink and blue and green. The Splat Roller is a special (if controversial) treat, cutting a blunt swath of paint across your path—and leveling anyone in your way like a steam roller.

Each time the opposing team painted their way across our side of the board, I found a quiet delight in following behind them, mopping up their colors with a fresh coat of my own. It felt like wiping dirty footprints off a clean floor. It's the same feeling provoked by those Buzzfeed lists of "oddly satisfying images," where objects combine, divide and unravel in smooth, symmetrical and color-coded ways.

There's a strange pleasure to arranging items in row, to filling a shape with a color, to making an object intersect with a line. There is something inside many of us that loves a perfectly bisected piece of fruit, a perfect headshot. Splatoon zeros in on the satisfaction common to them all: the zen thrill of the moment where order and completion emerges from chaos.

Initially, I focused far more on painting than I did on shooting; I didn't like shooters, after all. Maybe I could play more of a supportive role, I thought—you know, really focus on my art. My pacifism lasted exactly as long as it took me to round a certain corner while holding a semiautomatic paint dispenser, and mow down two of my opponents with quick, surgical strikes. As I saw their little squidly spirits rising from their bodies, I felt a very different sort of satisfaction coursing in my veins.

"I killed them!" I shouted, doing a brief but enthusiastic victory dance on the couch. "They died because of me!"

Like most people, I have a lot of competing or even opposing impulses and interests; there's clearly a part of me that enjoys the competitive side of shooters. It's just that those pleasures are typically buried inside a visually, narratively, aesthetically and personally hostile carapace, and I'm not usually interested in digging quite that deep to extract them.

Splatoon stripped that ugliness away, laid the best parts of shooting games bare, and covered them in a thick coat of strange, brilliant color. In a way, it reminds me a little of Left Behind, a companion piece to the zombie survival game The Last of Us. You spend most of the original game protecting a young girl named Ellie, but in this prequel tale you become her. She hasn't learned how to fight yet, so the skills you developed over the course of The Last of Us take on very different forms.

Before, you threw bricks in order to distract the undead; now, you and your friend walk around an empty, post-apocalyptic mall together and invent a game where you lob bricks at the windows of abandoned cars. Before, you learned how to stealthily sneak up behind your foes and shoot them in the head before they ate your face; now, you use the same skills—and button combinations—to have a water gun fight. It takes the mechanics of brutality, and transforms them into play.

That's how I felt, in Splatoon—like I was genuinely playing inside a shooter, in a way that I never had before.

Nintendo has taken a lot of hits over the last several years for its stubborn insistence on going its own way, especially when it comes to the Wii U platform. But with Splatoon at least, their iconoclasm has given us something truly special: a joyful, undeniably fun shooting game that upends the most alienating aspects of the genre while retaining its core pleasures—a game that looks and feels like a quintessential Nintendo experience, while still offering something original, exciting, and yes, totally fresh.