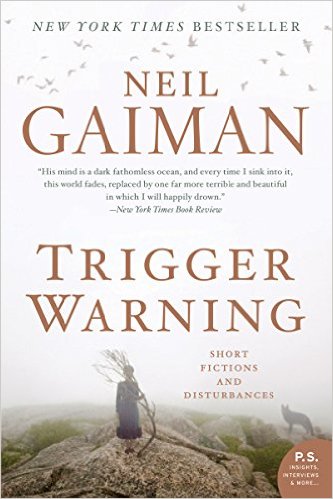 The Kindle edition of Neil Gaiman's Trigger Warning: Short Fictions and Disturbances is on sale today for $(removed)

In this new anthology, Neil Gaiman pierces the veil of reality to reveal the enigmatic, shadowy world that lies beneath. Trigger Warning includes previously published pieces of short fiction—stories, verse, and a very special Doctor Who story that was written for the fiftieth anniversary of the beloved series in 2013—as well “Black Dog,” a new tale that revisits the world of American Gods, exclusive to this collection.

Trigger Warning explores the masks we all wear and the people we are beneath them to reveal our vulnerabilities and our truest selves. Here is a rich cornucopia of horror and ghosts stories, science fiction and fairy tales, fabulism and poetry that explore the realm of experience and emotion. In Adventure Story—a thematic companion to The Ocean at the End of the Lane—Gaiman ponders death and the way people take their stories with them when they die. His social media experience A Calendar of Tales are short takes inspired by replies to fan tweets about the months of the year—stories of pirates and the March winds, an igloo made of books, and a Mother’s Day card that portends disturbances in the universe. Gaiman offers his own ingenious spin on Sherlock Holmes in his award-nominated mystery tale The Case of Death and Honey. And Click-Clack the Rattlebag explains the creaks and clatter we hear when we’re all alone in the darkness.

A sophisticated writer whose creative genius is unparalleled, Gaiman entrances with his literary alchemy, transporting us deep into the realm of imagination, where the fantastical becomes real and the everyday incandescent. Full of wonder and terror, surprises and amusements, Trigger Warning is a treasury of delights that engage the mind, stir the heart, and shake the soul from one of the most unique and popular literary artists of our day.

As a rule, I’ll watch pretty much anything with Ian McShane in it, from Lovejoy to Deadwood to Game of Thrones. American Gods? It’s definitely on the list. I can’t wait to see what Season 2 has in store… but I’m worried. With the exit of a number of key players that made the first […]