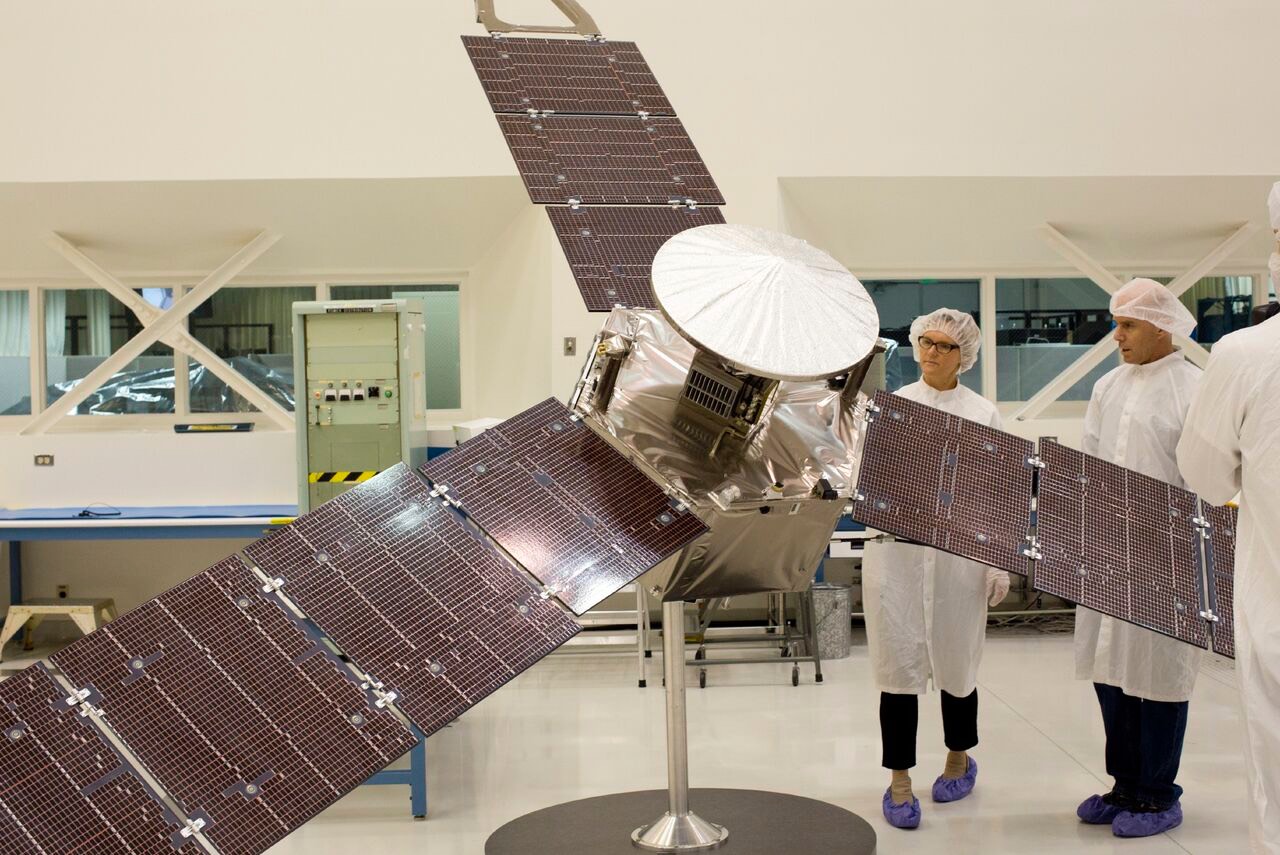 Recently, I was granted the rare privilege of stepping inside one of the largest cleanrooms at NASA's Jet Propulsion Laboratories. I was there to learn about this year's blockbuster space mission, Juno, and chat with some super smart science and engineering people who worked on the project.

Juno is a spacecraft that was launched into space nearly 5 years ago, and is currently headed towards Jupiter. If all goes well, at 8:18pm on July 4th (USA! USA!), it will fire off its main thrusters to slow down and become a satellite of the fifth planet from the sun. That's super exciting because not only is Juno tasked with sending us a lot of up-close, never-before-seen images of the gas giant, but the information it gathers could teach us entirely new things about the origin of our solar system.

Entering the cleanroom was a bit of a process. Along with the other media teams there, I was escorted down a hallway in one of the Pasadena campus' buildings, into a staging area, where we were instructed to swab down all recording equipment with alcohol and cloths. We entered and exited doorways with sticky mats intended to collect loose particles of debris. After gearing up in gowns, hairnets, latex gloves, and shoe booties, we stepped two at a time into a small glass chamber for a several-second air shower.

The cleanroom itself is pretty much what you'd expect: white and fluorescent, with tall ceilings, like a warehouse. Once inside, we were shown some objects of interest, including a ¼ scale model of the spacecraft, full sized models of one of the solar arrays, the equipment vault, and JunoCam, the onboard camera.

A plastic, full-size model of the equipment vault. The plexiglass here is titanium on the real deal. Photo: Katherine Leipper.

A plastic, full-size model of the equipment vault. The plexiglass here is titanium on the real deal. Photo: Katherine Leipper.

"A Planet On Steroids"

Scott Bolton, Juno's principal investigator, started us off with a presentation about the mission and its challenges. Jupiter isn't just some giant pile of gas with not much going on.

"Everything about Jupiter is extreme--it's a planet on steroids," said Bolton. "It has the strongest gravity, radiation, and magnetic fields" of any planet in the solar system, he explained.

One of the mission objectives is to discover more about the formation of Jupiter and with it, the rest of our solar system. Jupiter was probably formed first, so by learning about its creation and figuring out "the recipe", as Bolton called it, we can understand more about the rest of the planets. We don't know much about the gravity on Jupiter, its magnetic field, oxygen content, or if it even has a solid core, but it's Juno's job to find out.

We do know that while Jupiter's element composition is almost the same as the sun (mostly hydrogen and helium), it is enriched with other elements, like carbon, nitrogen, sulfur, and noble gasses. All the basic stuff things are made of here on Earth.

NASA JPL's Scott Bolton explaining to us n00bs how they are using info about Jupiter to determine how the solar system was formed. Photo: Katherine Leipper.

A unique challenge posed to the mission is the fact that Jupiter is radioactive as f**k. It's "a radiation environment that no other mission has gone into before," said Doug Bernard, a Juno project systems engineer. The radiation is caused by the planet's magnetic fields, which trap electrons and ions. Over the course of the year and a half long mission, Juno will be subjected to the radiation equivalent of 100 million dental X-rays.

Because of this, Juno contains a special equipment vault made of over 200 kg of titanium, 1cm thick, to protect sensitive instruments and electronics. Most radiation ends up being shielded, and the vault cuts down exposure by a factor of 800, but still some gets through, and eventually everything will start to fail. Steve Levin, a project scientist, told me about how various sensor perform cross checks to see if things are working, like measuring temperatures and voltages. Copies of each piece of equipment that was sent to space were tested at various radiation levels, but still, there is no way to create an environment for testing as bad as Jupiter's here on Earth. I asked if the radiation would cause any interference with communications, but Bernard told me that at the frequency they use, it's not a problem.

Juno, as you have probably gathered by reading this far, is not a manned mission. There are no humans on board the spacecraft. But Juno does have three "passengers" on board: "Jupiter", "Juno", and "Galileo" are three space-grade aluminum Lego mini figurines.

I wandered over to Elsa Jensen, an operations engineer for JunoCam, who showed me a model of the camera similar to the one on board. Jensen explained that JunoCam will be taking 15 images per orbit. It will take two hours for Juno to reach Jupiter's south pole from the north, but because of the elliptical path of travel, it will take 14 days to get back from the to the north pole from the south.

When it reaches the perijove (the point in orbit closest to Jupiter —and a good Scrabble word), it will take pictures at 1600 x 1200px. At that point, Jupiter's face will entirely cover the camera's field of view. This will be the closest a camera has ever been to the planet, the first time we will be able to see through the clouds, and the first time we will see images directly over the north and south poles.

I asked about radiation's effects on JunoCam, and Jensen said that thick glass would protect the lens, but that radiation would show up as "salt and pepper" on the images. Like everything else on the spacecraft, over time, the camera will get more and more irradiated, and as a result, they will have to keep lowering the compression (i.e. capture more image data), which in turn means that they will take more time to downlink back to earth. The images are saved as JPEGs, compressed with DCT (discrete cosine transform), for all you serious nerds out there.

Jensen added that public outreach is an important part of the Juno mission. Non-rocket scientists can get involved by voting on what Juno take pictures of. I hope Jupiter isn't too self-conscious.

My visit to JPL was an awe-inspiring experience. A project like Juno is so mind-bogglingly complex, it's hard to believe that it's science non-fiction. Then again, maybe it's just another part of the great cosmic simulation.