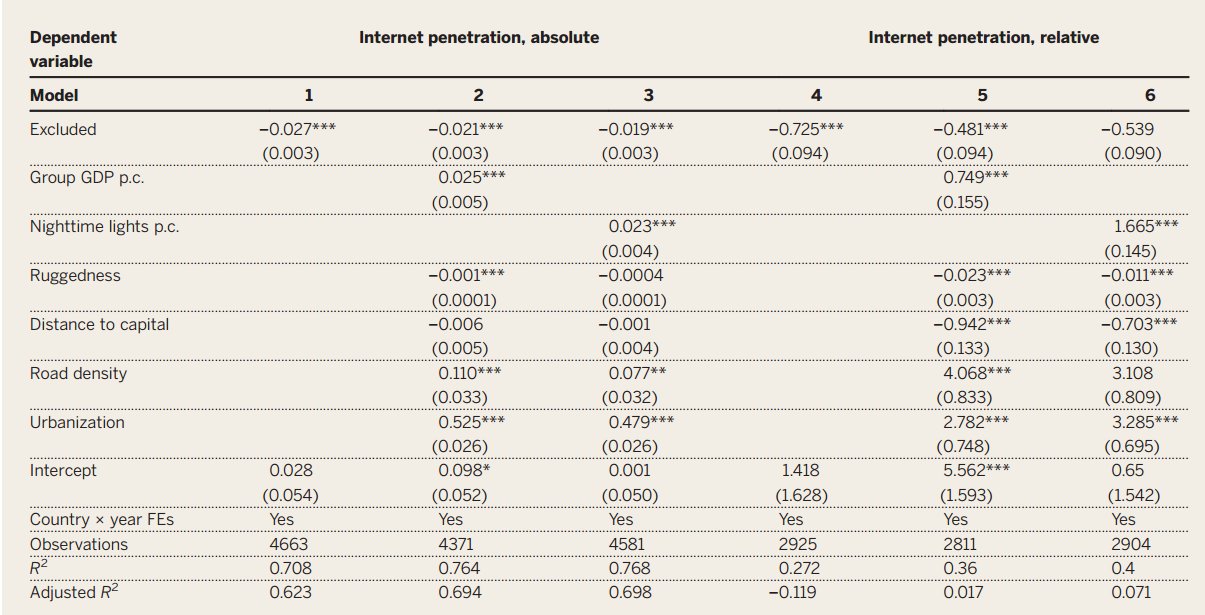 In Digital discrimination: Political bias in Internet service provision across ethnic groups (Sci-hub mirror), a new paper in Science, political scientists from the University
of Konstanz and elsewhere document the practice of "ethnic favoritism" in internet provision, through which autocratic regimes use telcoms policies to discriminate against opposition groups.

The regression results in Table 1 demonstrate T1
that excluded groups’ political status leads to significantly
lower Internet penetration rates compared
with included groups in the same country.
This result is not driven by the groups’ level of
development, their geographic location and quality
of infrastructure, or their urban-versus-rural
settlement pattern. The coefficients indicate that
on average, excluded groups have between 0.019
and 0.021 subnetworks fewer per 1000 capita than
politically included groups in the same country
(models 2 and 3). To put this result into context,
models 5 and 6 indicate that exclusion leads to
a reduction in relative Internet penetration by a
factor of about 0.6 (e
−0.481 and e
−0.539, respectively).
This means that, all other factors being
equal, an included group with an average level
of Internet penetration for its country would
receive only ~60% of that level if it were an
excluded group. In additional analyses, we confirmed
that this result is driven not only by
lower penetration rates associated with exclusion
(when comparing only groups that have
some level of penetration) but also by excluded
groups’ higher probability of having no Internet
coverage at all (tables S2 and S3). Table S4 shows
that, using the approach of (21), the inclusion of
our control variables appears to be sufficient to
remove bias from unobserved confounding variables.
To study variation in the effect of exclusion
across countries, we also used multilevel regression
models (supplementary materials, section 6). These
models fail to provide evidence that democracy
alleviates the negative effect of exclusion on
Internet coverage. Rather, they suggest that if
democracies exclude groups politically, their level
of digital discrimination is comparable to that of
nondemocracies. Overall, however, because democratic
countries have much lower percentages of
excluded populations [on average 6%, compared
with 21% in nondemocracies, according to the
EPR data (7)], digital discrimination is a much
more severe issue in nondemocratic countries.