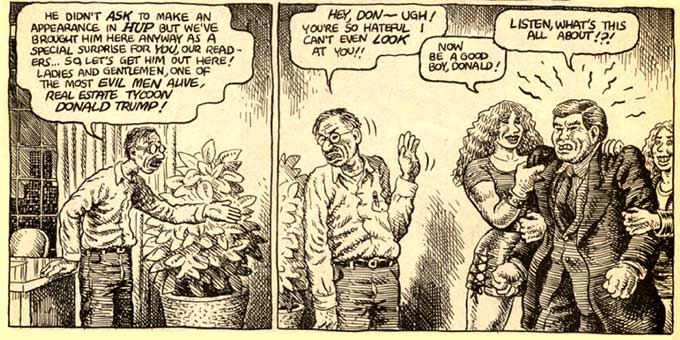 It's always interesting to hear what Robert Crumb has to say about notable people, alive and dead. In the latest installment of "Crumb on Others," Alexander Wood asks Crumb about Castro, Lenin, and Trump.

Crumb: Yeah, but I would watch him and find him so offensive, so obnoxious and hateful. How could anybody just looking at him and watching his behavior think for one second that he’s anything but a sociopath!? I just couldn’t imagine how anyone could think he’s a viable candidate for the presidency. On the other hand, Bernie Sanders who was out actually speaking some truth – I thought he was great. You see that’s what happens when you get a politician who actually tells the truth— nope, can’t have him. The Democrats made sure he didn’t get nominated. They reaped what they sowed, the Democratic Party operatives, when they fixed it so Bernie would lose the primary votes in New York and California.

Alex: Also, a lot of people are just biologically wired to be really taken in by authoritarian people.

Crumb: That’s true, you’re right. You’re right. They just want a big, strong chief who will take care of everything, lead them into battle and provide the big feast afterward and parcel out the spoils. Yep.

Alex: And the weird thing is, it doesn’t have that much to do with education. You can be a very educated person but a very pro-authoritarian person and you’re really going to be sympathetic to Trump.

Crumb: “We’re going to take care of this.” Yeah. “We’re gonna get this straightened out and kick out all the parasites and lock some people up, etc.”

Alex: Some eggs are gonna be broken when you make an omelet, you know? And that’s just the way it is, and he’s gotta take charge. A lot of Americans like that. A no nonsense kind of guy, who’s just gonna take charge, because it simplifies their world. They just feel someone’s going to take care of the problems that are just too complicated for them.

Crumb: Yeah, that’s right. Hitler explains all that in Mein Kampf. He’s very straight forward about it. If you want to galvanize the population behind your political cause you’ve got to speak simply to them, you’ve got to keep it black and white and you’ve got to have an enemy that’s very obvious, that you can point to. Hitler was kind of a genius that way. I wonder how soon it’s going to be before the general run of the supporters of Trump start to feel betrayed. I wonder how long that’s going to take.