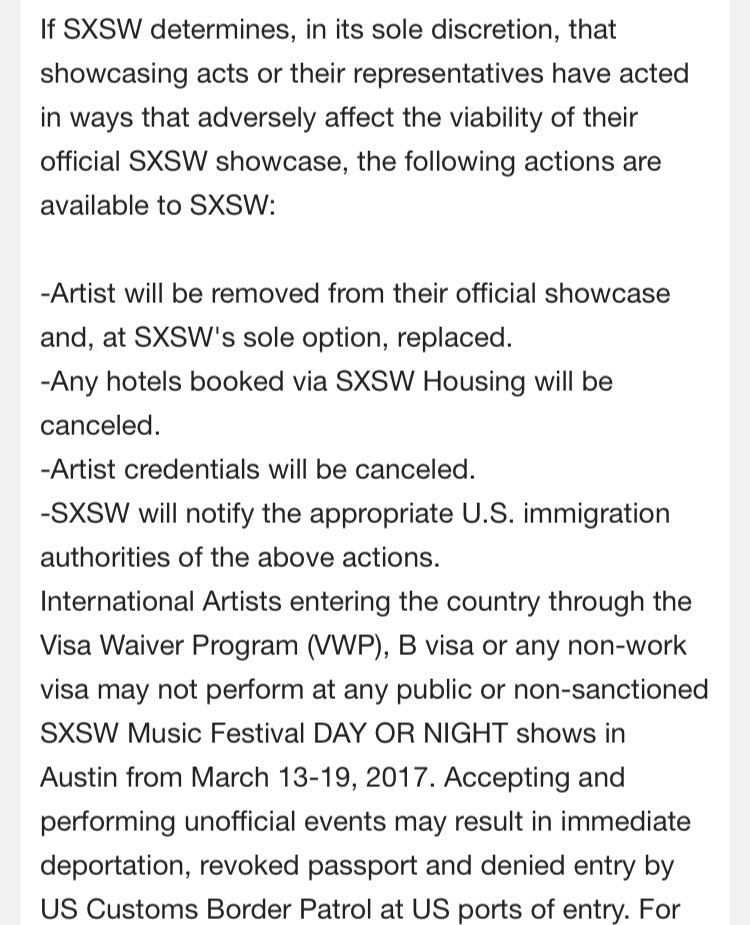 Evan Greer writes, "SXSW is one of the most popular music festivals in the US. It was just revealed that they are actively threatening bands from outside the US with "immediate deportation' and immigration investigations if they perform at 'unofficial' events during the festival. At a time when immigrants are under attack, this policy is all the more chilling. Sign the petition to tell them to drop this practice." SXSW has had this policy for years, apparently, but it still sucks.

SXSW opposes discrimination of any kind, and has taken a public stand against President Trump’s travel ban and proposed legislation like SB6 in Texas. We have and will continue to support human rights for all. In this political climate, especially as it relates to immigration, we recognize the heightened importance of standing together against injustice.

SXSW has never reported anyone to any immigration authorities, including Customs & Border Protection (CBP), the agency that deals with participating artists entering the United States.

Participation from individuals and organizations who bring a different perspective — especially those who travel from all over the world — to Austin each March is what makes SXSW a special event.

We have been coordinating with international acts coming to SXSW to try and mitigate issues at U.S. ports of entry, and will continue to build a coalition of attorneys to assist any who face problems upon arrival in the States.

The language in our Performance Agreement is intended to facilitate U.S. entry for international artists and to show CBP that SXSW takes visa issues seriously. This language has been part of the contracts since the summer of 2013, and we will be reviewing and amending it for 2018 and beyond.

In regards to the situation surrounding Told Slant, before we had clarity on the situation we believed this artist had taken our language out of context. We apologize for this error.

A major reason for SXSW’s existence is the discovery of new and exciting artists from around the world, and our hope is that we can help these creative people achieve their goals.

After looking through this contract sent to me by sxsw I have decided to cancel Told Slant's performance at the festival pic.twitter.com/rI2Xv0duJl