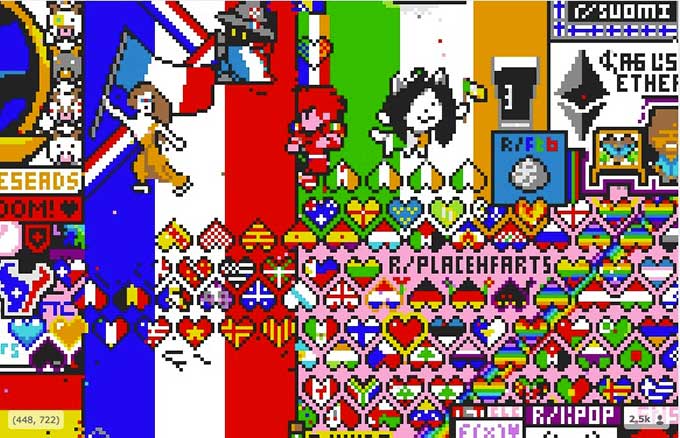 What happens when you offer Reddit users a large digital canvas and allow each participant to place one pixel, every few minutes, on it? You'd think it would be a mess. But somehow, in 72 hours, the canvas turned into a complex mosaic of flags, symbols, messages, and even a sepia Mona Lisa. This article from sudoscript examines this marvel of massive, remote collaboration.

The rules were simple. Each user could choose one pixel from 16 colors to place anywhere on the canvas. They could place as many pixels of as many colors as they wanted, but they had to wait a few minutes between placing each one.

Over the following 72 hours, what emerged was nothing short of miraculous. A collaborative artwork that shocked even its inventors.

From a single blank canvas, a couple simple rules and no plan, came this.

When Place was launched, with no warning, the first users started placing pixels willy-nilly, just to see what they could do. Within minutes, the first sketches appeared on Place. Crude and immature, they resembled cavemen paintings, the work of artists just stretching their wings.

Even from that humble beginning, the Creators quickly saw that the pixels held power, and lots of potential. But working alone, they could only place one pixel every 5 or 10 minutes. Making anything more meaningful would take forever — if someone didn't mess up their work as they were doing it. To make something bigger, they would have to work together.

That's when someone hit on the brilliant notion of a gridmap. They took a simple idea — a drawing overlaid on a grid, that showed where each of the pixels should go — and combined it with an image that resonated with the adolescent humor of Redditors. They proposed drawing Dickbutt.