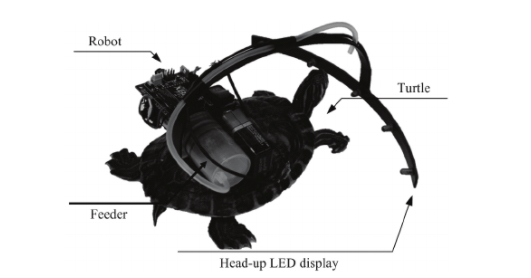 Researchers at the Korea Advanced Institute of Science and Technology attached small robots to the back of turtles and enabled the machine to steer the animal by delivering it snacks. Eventually, they hope to use similar systems to control fish and birds. The technology could lead to parasitic robot/animal "teams" for surveillance, exploration, and disaster response. From New Scientist:

The robots comprised a processor, a frame that stuck out in front of the turtle's head holding five red LEDs spaced apart, and a food-ejecting tube. They then had to ride their turtle through five checkpoints in a tank filled with water…

The turtles were first conditioned to associate a lit-up LED with food. The robot then simply guided it using the LEDs and fed it snacks as a reward for going in the right direction. Using this process, five robot-turtle pairs successfully completed the course, and each sped up with practice.

This curious wombat waddled over to a human, while the critter was wandering through snow-covered Cradle Mountain, in Tasmania, on Wednesday August 5. "Only one vehicle allowed on the bridge at a time 😆😍 I was more than happy to give way to this beautiful Wombat," Tasmania-based photographer Nikki Long said in an Instagram post. […]