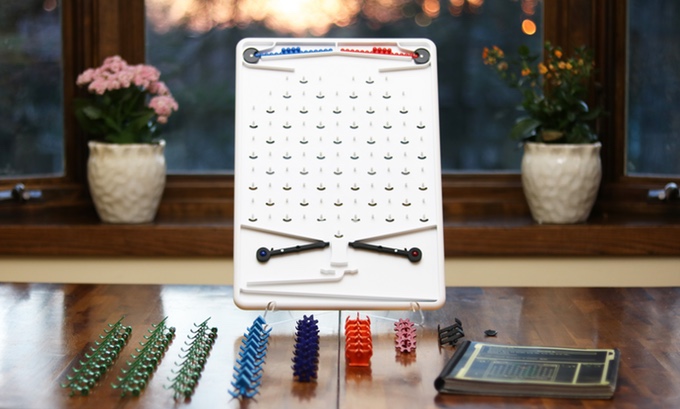 Turing Tumble is a mechanical computer with switches that are activated by rolling marbles down an inclined plane. To program it, you attach plastic switches and components to it. The Kickstarter launched today and it's off to a great start.

Players add logic by putting 6 different types of parts onto the board:

The ramp directs balls in one direction, either to the left or to the right.

The crossover lets ball paths cross over one another. Balls come in one side and exit on the opposite side.

The bit adds logic. It stores information by pointing to the right or to the left, like a 1 or 0. It becomes more and more important as the puzzles progress.

When the computer’s objective is complete, the interceptor is used to stop the computer from releasing any more balls.

Like the bit, the gear bit stores information by pointing right or left, but when the gear bit is flipped, it also turns other gear bits connected to it by gears.

The gear bits are mind-bending, but they add a whole new level of functionality to the board. They also make the computer "Turing complete", which means that if the board was big enough, it could do anything a regular computer could do!

Turing Tumble comes with a book of 51 puzzles. They start out easy and become steadily more challenging. Each puzzle leads the player to discover new concepts that can be applied to more complicated puzzles later on. The puzzles are woven into a 20-page comic story, beautifully illustrated by Jiaoyang Li, where each puzzle brings Alia the space engineer closer to rescue from a seemingly deserted planet. Jiaoyang is a senior at the University of Minnesota, majoring in both art and computer science. This will hopefully be her first published artwork.