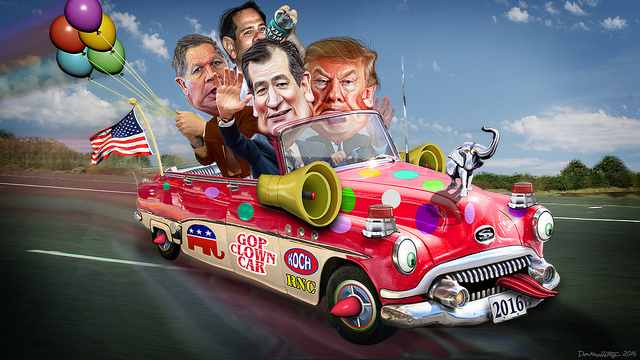 Up until now, Russian and other foreign bots have been chummy with Trump and the GOP on social media, with "nearly half of the president’s followers appearing to be fake or spam accounts," according to Newsweek.

But over the last 48 hours, these bots have begun to change their tune. According to Newsweek:

Russian-linked bots and trolls have caused a surge in use of the hashtag #ResignPaulRyan on Twitter over the last 48 hours, just as the Republican speaker of the House was returning to his hometown of Wisconsin for a month-long respite from Washington, D.C.

A monitoring dashboard established by the Alliance [German Marshall Fund’s Alliance For Securing Democracy] noted the uptick Monday morning. It coincided with surges in the use of other hashtags by Russian bots, including #TrumpTV, #Magnitsky, #Fake and #ConfessYourUnpopularOpinion.

It hasn’t been a common occurrence for the Alliance’s dashboard to pick up on Russian bot activity targeting members of the GOP since the site was first launched last week by former FBI special agent Clint Watts. But Ryan wasn’t the only member of Trump’s party to face countless bots demanding his removal. A campaign calling on the president to fire National Security Advisor H.R. McMaster received widespread support from bots and trolls over the last several days using the hashtag #FireMcMaster, eventually getting picked up by some right-wing fake news sites that seem to have the president’s full attention, including Breitbart.

Nice time to go on a 17-day vacation.

Jesselyn Cook noticed that a site called NewsBuzzr had ripped off one of her stories at Huffington Post. It turned out to be some kind of awful plagiarism bot that uses a thesaurus to avoid detection as duplicate content, resulting in hilariously mangled prose. Cook calls it “truly excellent “Florida Male” content” and I hope […]

Airhelp is a service that helps airline passengers in 30 countries file claims (for delays, lost bags, overbookings, and cancellations) structured to increase the likelihood of paying out; the bots have made $930m in successful claims to date, and the company behind it only collects a commission when a claim succeeds.

Just days before the horrific mass murder at Pittsburgh’s Tree of Life synagogue, my Institute for the Future colleagues Sam Woolley and Katie Joseff published a deeply upsetting study on how social media bots and computational propaganda are being used to instigate and amplify anti-semitism online and manipulate public opinion. From the paper: This report […]