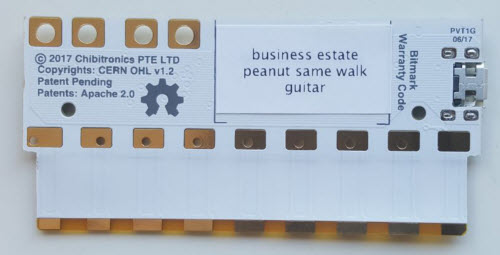 Legendary hardware hacker Andrew "bunnie" Huang (previously) has an open-source hardware company called Chibitronics; anyone can make their own version of a Chibitronics product, because Bunnie is convinced that his versions will be better and cheaper than theirs.

But what Bunnie isn't cool with is any of a number of widespread scams that make any hardware business very difficult to sustain, including factories that run "third shifts" to produce off-the-books products; cheap shitty counterfeits whose failures are attributed to him; and a weird scam where hardware is claimed to be defective, returned for a refund to a depot that sells it as new, then it's secretly sold and returned as defective again, and so on and so on...

Bunnie is now using a startup called "Bitmark" to fight this: Bitmark uses the blockchain to log the history of every product Chibitronics ships. These records can be retrieved by keying in a unique six-word phrase on a tamper-evident label that's on every product. Bunnie provides enough labels to the factory subcontractor to put one on each ordered unit, but there are no spares to use for labeling a third shift. The identifiers track the history of each product, so if a unit that's been returned as defective re-enters the stream, that's immediately apparent.

It's not a foolproof system, but it's still a fascinating blockchain application, one of the most interesting I've seen so far.

We release just enough of these pre-printed labels to the factory to run our authorized production quantities. This allows us to trace a bitmark back to a given production lot. It also prevents “ghost shifting” – that is, authorized factories producing extra bootleg units on a midnight shift that are sold into the market at deep discounts. Bitmark created a website for us where customers can then claim their bitmarks, thus registering their product and making it eligible for warranty service. In the event of an exchange or return, the product’s bitmark is updated to record this event. Then if a product fails to be returned to the factory, it can’t be re-claimed as defective because the blockchain ledger would evidence that bitmark as being mapped to a previously returned product. This allows us to defer the repatriation of the product to the factory. It also enables us to use unverified third parties to handle returned goods, giving us a large range of options to reduce reverse logistics costs.

Bitmark also plans to roll out a site where users can verify the provenance of their bitmarks, so buyers can check if a product’s bitmark is authentic and if it has been previously returned for problems before they buy it. This increases the buyer’s confidence, thus potentially boosting the resale value of used Chibi Chips.

For the cost and convenience of a humble printed label, Bitmark enhances control over our factories, enables production lot traceability, deters cloning, prevents warranty fraud, enhances confidence in the secondary market, and gives us ample options to streamline our reverse logistics.

Of course, the solution isn’t perfect. A printed label can be peeled off one product and stuck on another, so people could potentially just peel labels off good products and resell the labels to users with broken clones looking to upgrade by committing warranty fraud. This scenario could be mitigated by using tamper-resistant labels. And for every label that’s copied by a cloner, there’s one victim who will have trouble getting support on an authentic unit. Also, if users are generally lax about claiming their bitmark codes, it creates an opportunity for labels to be sparsely duplicated in an effort to ghost-shift/clone without being detected; but this can be mitigated with a website update that encouraging customers to immediately register their bitmarks before using the web-based services tied to the product. We also have to exercise care in handling lists of unclaimed phrases because, until a customer registers their bitmark claim phrase in the blockchain, the phrases have value to would-be fraudsters.

Why I’m Using Bitmarks on my Products [Bunnie Huang]