Roy Moore, GOP Senate nominee in Alabama, accused of sex acts with girls as young as 14 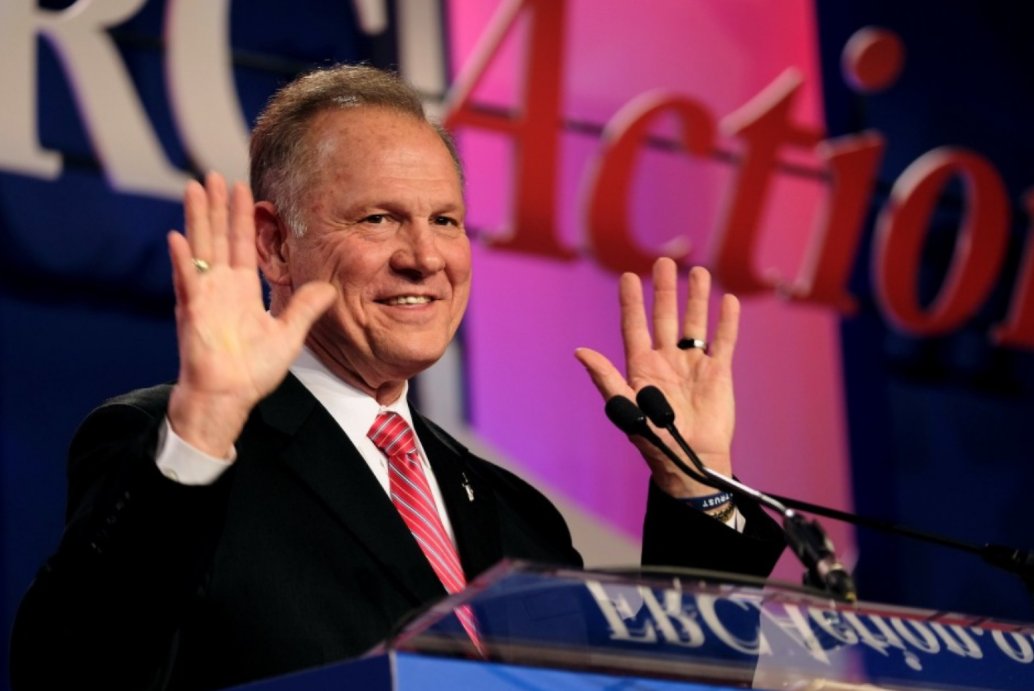 Ultra right-wing Christian GOP Senate candidate Roy Moore is accused of having sexually abused four underage girls, the youngest of whom was 14 at the time.
.

Leigh Corfman says she was 14 (around the age she was in this family photo, below) when a 32 year old Moore removed her clothes and groped her, and moved her hand to touch his genitals.

“These allegations are completely false and are a desperate political attack by the National Democrat Party and the Washington Post on this campaign,” Moore, who is 70, said.

If so, please join our campaign’s Christian Conservative Coalition today!

Moore campaign issues a statement on WaPo story "This garbage is the very definition of fake news and intentional defamation.” pic.twitter.com/hMlacQi2H6

Sen. Jeff Flake says if allegations against Roy Moore prove true, he should withdraw from the race. @bethreinhard

Alaska senator Lisa Murkowski in the Post's Roy Moore bombshell story: "I'm horrified and if this is true he needs to step down immediately."

One of Corfman’s friends verified that she had said when she was 14 that she had been seeing Roy Moore https://t.co/3aMJq2mskc

Alabama elections division spox tells me it's "too late" to replace Moore on the ballot. Ballots already being printed; absentees already sent out.

Breitbart: Maybe Roy Moore dated kids but if he did he was romantic and read them poetry pic.twitter.com/yVYDCFc6Gp

If Moore were to lose this special, Senate majority is suddenly in-reach for Demshttps://t.co/5nFkQKPUl7

This is jaw dropping – especially from a man who has linked homosexuality to child abuse. Great reporting from @bethreinhard
and @mccrummenWaPohttps://t.co/clTIAP6i5E

It says a lot about our day & age that the Post felt it needed to clarify that Roy Moore’s accusers vote Republican and never donated to Dems. pic.twitter.com/Eads7MUCWJ

Everything about this Roy Moore piece is incredible but this seems especially important https://t.co/DBDTcEApKX pic.twitter.com/IARwJgjVcj

As of today, before this story broke, only one Republican senator, Flake, has explicitly said he opposes Moore.

Before everyone says "oh now Moore will never win" let's remember all the women who came forward and accused Trump of sexual harassment/assault before his election day... https://t.co/wClNkwBCZT

It is a very, very big deal that this story has so many women willing to speak publicly about this and to use their names. It is very difficult for survivors to do and very difficult for reporters to get. There's a reason there are three bylines. https://t.co/wQGWrDN50e

Alabama political columnist -> "Heard rumors about this for years." https://t.co/AeCnN5cKCk

Keep in mind: ***Just last night*** Governor Kay Ivey said she would vote for but not endorse Roy Moore.

Something to consider as people put their names on the record along with allegations of sexual abuse or other misconduct: It often inspires more victims to come forward https://t.co/Hyb4h5YqLs pic.twitter.com/KFM1BR1PPn

Breitbart's official position is: pedophiles are fine as long as they're racist enough. https://t.co/9q0GtkyA7i

r/The_Donald weighs in on Roy Moore, and it's two million sandwiches short of a picnic. pic.twitter.com/RfVgzPvltT

Reminder: GOP Nominee Donald Trump bragged about being to grab women by the genitals. On tape.

Imagine being a Breitbart reporter and not knowing any details about the allegations or how much reporting the Post did, deciding to knee jerk defend someone accused of initiating a sexual encounter with a 14 year old https://t.co/JZELeqYTWF