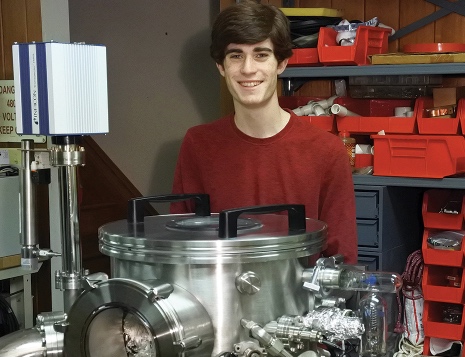 Sam Zeloof, 17 built out a 1970s-vintage chip fab in his parents' New Jersey garage so he can make DIY integrated circuits. Why? So he can better understand how they work.

It's a "way of trying to learn what’s going on inside semiconductors and transistors," Zeloof told IEEE Spectrum. "I started reading old books and old patents because the newer books explain processes that require very expensive equipment.”

He obtained much of his raw materials and equipment from online sellers, in various states of repair. “Acquiring all the equipment and building and fixing all the stuff I take off eBay is half of the whole journey,” he says. His equipment includes a high-temperature furnace, a vacuum chamber built from surplus parts, and a scanning electron microscope. The electron microscope was “a broken one from a university that just needed some electrical repairs,” says Zeloof. He estimates that the microscope originally cost about $300,000 back in 1996. It was listed for sale at $2,500, but Zeloof persuaded the seller to take “well below that” and ended up spending more on shipping than it cost to buy the microscope.

“If all goes well, maybe I could make chips for people in the [maker] community—in small batches," he says.