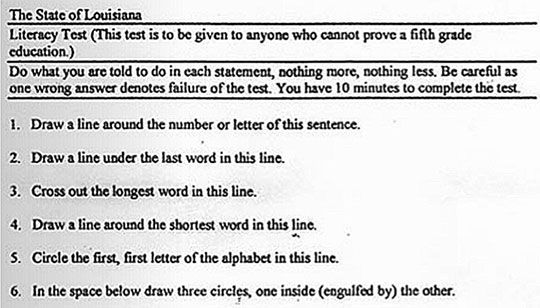 States have a patchwork of arcane, antiquated laws that disenfranchise citizens deemed to be "incompetent," "incapacitated," "idiots" or "insane persons." Tens of thousands of people -- especially elderly people believed to have dementia -- lose their votes every year under these rules.

Disenfranchisement can be triggered by the conservatorship process, in which a trustee (often a family member) takes over the legal affairs of a person who is struggling with the intricacies of daily life.

These people are subjected to a "competence" quiz reminiscent of the impossible Jim Crow administered to African-Americans who attempted to register to vote. The quiz requires potential voters to articulate their political preferences in detail -- meanwhile, people not under a cloud of suspicion can cheerfully admit that they're voting for a candidate "because I'd like to have a beer with him," and no one bats an eye.

Advocates for people with mental and developmental disabilities don't deny that some people lack the capacity to meaningfully exercise their franchise, but they call for a clear, uniform, national standard for who can have their vote taken away.

But in those examples of voter fraud, it’s not the person with a disability committing the crime — it’s the caretaker or family member, said Michelle Bishop, an advocacy specialist at the National Disability Rights Network based in Washington.

“We don’t strip someone of their rights in the name of protecting their rights,” Bishop said. “They are literally the last people in the U.S. who can get their right to vote stripped because of their identity. Having a disability does not mean you are not competent to vote.”

While some may not be able to make sound choices about their health care or finances, they can still understand and participate in the electoral process, Bishop said. The capacity to make choices depends on the situation.

Trump has been railing against the idea of mail-in voting for a while now, even as he claims that it’s fine sometimes, like when he does it, and even though there is no substantial body of evidence that anyone has ever seen to suggest any kind of pattern of rampant individual voter fraud. Of course, […]