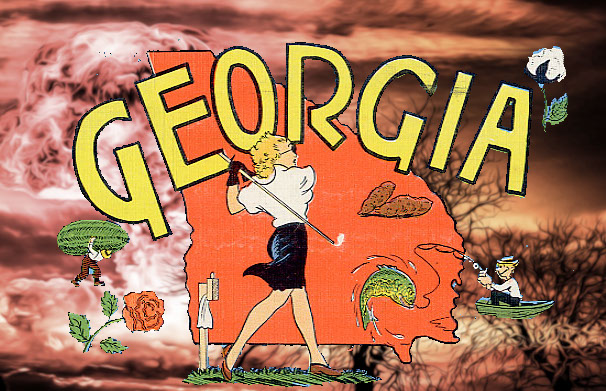 A federal lawsuit brought by voting security activists against the State of Georgia has revealed breathtaking defects in the state's notoriously terrible voting machines -- and, coincidentally, the machines in question were wiped and repeatedly degaussed by the state before they could be forensically examined as evidence of their unsuitability for continued use.

Only four US states use voting machines that do not produce a paper audit-tape that can be used to verify their performance. Georgia is one of those states.

The most dramatic failing in the state's 16-year-old voting machines was in Habersham County's Mud Creek precinct, where 670 ballots were cast, even though only 243 voters are registered in the precinct. No one can explain how 243% of eligible voters turned out on election day, but the State of Georgia's official legal position is that nothing is wrong here.

Georgia’s Secretary of State Brian Kemp insisted that nothing was wrong, in a statement sent by his spokesliar Candice Broce: "Alongside federal, local, and private sector partners, we continue to fight every day to ensure secure and accurate elections in Georgia that are free from interference. To this day, due to the vigilance, dedication, and hard work of those partners, our elections system and voting equipment remain secure."

Security researchers have long been anxious about electronic voting machines; and Georgia's machines have come under particular scrutiny for being the worst in the nation.

Earlier this year, the Georgia legislature passed a bill that criminalized routine security research; thankfully, the governor vetoed it.

Kennesaw State University’s Center for Election Systems, which was responsible for running Georgia’s elections, was proven vulnerable by friendly cybersecurity experts both before and after the 2016 elections.

Voter information and other important data, which gets disseminated to polling places in Georgia’s 159 counties, was open to the public and could have been manipulated by bad actors, charged Logan Lamb, the first friendly hacker to notify the state of the issue. He sent that notification in August 2016, but the problem was not fully solved until March 2017.