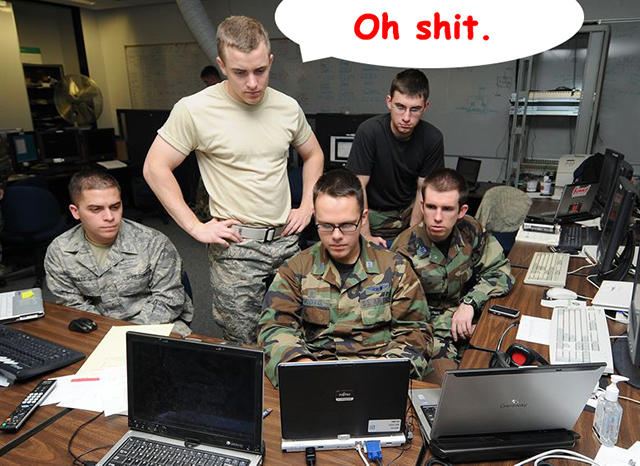 The Government Accountability Office used a team of hackers to see what sort of shenanigans could be caused with a little bit of access and a whole lot of digital kung-fu. The results aren't a good look for America's military. In one instance, the red team that the GOA used was pitted against Pentagon personnel tasked with holding the line against cyberintrusions. The security checks that the Pentagon were easily bypassed, thanks to the use of easy-to-crack passwords and "insiders" who were familiar with the program acting as meatspace backdoors to what would normally be secure systems. It gets worse: hackers working for the GAO reported being able to watch, in real time, a system operator's every move. Everything they did on screen was observable from a remote location and, if the hackers had wanted to, they could have taken the system over. The Washington Post reports:

One team reported that they caused a pop-up message to appear on users’ terminals instructing them to insert two quarters to continue operating.

So yeah: the most powerful military force in the world is, despite recent efforts to tie off existing vulnerabilities, ill-equipped to detect or fend off against cyber attacks that could cripple many of the technological advantages that the Army, Navy, Air Force and Marines use to maintain an edge over enemy combatants.

A joint advisory from the FBI and the Department of Homeland Security’s Cybersecurity and Infrastructure Security Agency (CISA) warns that Chinese hackers are targeting U.S. based COVID-19 research entities.

A hacker is accused of bribing an employee of the game Roblox and gaining access that allowed the hacker to see user account info, reset passwords, and grant virtual in-game currency, by way of the back end customer support panel of the massively popular online video game.