These boots from GORUCK are crazy comfortable 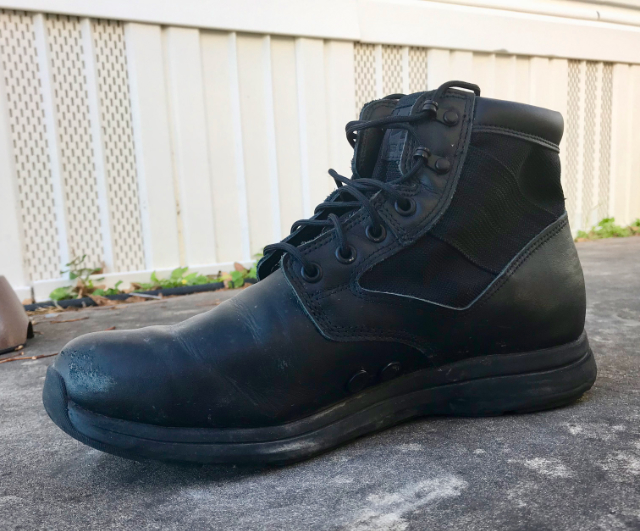 I wish I could wear running shoes, but I shouldn't. When I was a teenager, I tore all of the ligaments in my right ankle. Six weeks of physiotherapy and now, close to 20 years later, I'm still walking around on wobbly scar tissue. My ankle loves to roll out from under me, for any excuse at all. So, for extra support while I'm out strutting around, I wear combat boots. They tend to last longer than comparably priced hiking books and, depending on the boot, can be gussied up for special occasions. The downside to wearing combat boots is that even the lightest among them can still be pretty heavy.

Enter GORUCK's MACV-1. They call it a "Jungle Rucking Boot," but it's not at all dissimilar to the lightweight duty boots from companies like Magnum or 511 Tactical that I used to wear to work. Available in black or coyote brown, they ride just above the ankle and, at 14 ounces each, are one of the lightest pairs of boots I've ever lashed to my footies. Despite their light weight, they seem, so far, to be well made. The majority of the boot is made using full grain leather, which comes out of the box already holding a shine. It didn't take me long to wear the shine down to nothing, but it's the thought that counts.

The rest of the MACV-1 is comprised of 1000D Cordura and, for extra ankle support, a strip of 2" nylon webbing that runs down the back and side of each boot. The boots aren't waterproof, but the materials they're made with offer enough water resistance to keep your socks dry in the rain. Wade in the water and you're gonna get wet--but not for long. The boots come with vents cut into their sides to provide for better air circulation while walking or for drying them out as you go on your way.

I've got a wide foot and found the toe box in the MACV-1 to be pretty roomy. I've also got a high instep. Out of the box, the boots pinched me there -- to begin with. After 20 minutes with a cobbler, they were stretched out enough for me to wear them, pain-free. Aside from stretching the top of the boot for my Fred Flintstone feet, there was no breaking in or tinkering required to make these things comfortable to wear. Walking around in them, I feel well supported. I've gone jogging and hiking in them. They're the first boots I reach for when I go shopping. That said, they're a might warmer than my Belleville Transition Training Boots, so I'm not sure if they'll be coming with me on the two-month road trip to Mexico we have planned for the new year.

My only complaint about them is the tread: the MACV-1's great on dry pavement, tile, mud and over uneven ground. But they're not great on wet, smooth surfaces. There's not a lot of grip on them for that sort of thing. I've also got some concerns, due to the shallow depth of the treads, of how well they'll wear. That said, for the price, they're a great pair of kicks that I think will serve me well for at least a few years of adventuring.