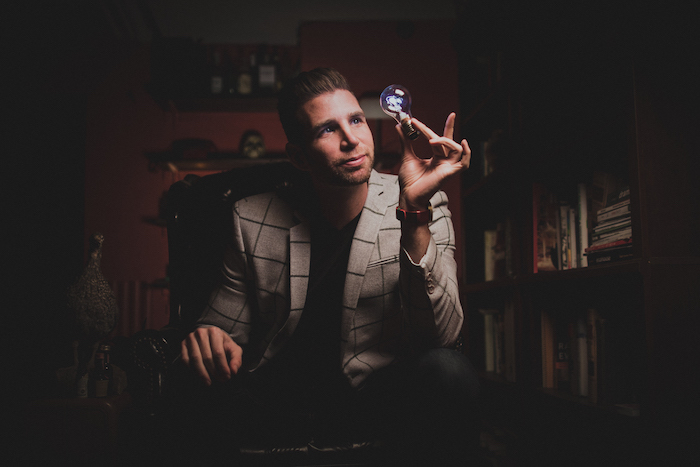 I recently had the good fortune of catching Jay's latest show, Six Impossible Things. Whatever your notion of a magic show, this is likely something different: the audience is not expected to simply watch magic but to experience it. With only 20 guests allowed at every show, Six Impossible Things is an immersive hour-long experience, brimming with mystery, intrigue, and spellbinding magic. Directed by Luke Jermay — another well-respected magical performer in his own right — Six Impossible Things is a show with a soul. Imagine having been invited to someone's very cozy, quirky and fascinating home; a place where magical things happen right under your nose and in your very hands.

Taking his guests by the hand into the Wonderland of his own creation, Joshua has the elegance, warmth, and caring attitude of a master host. As Joshua himself says, "The interplay between magician and audience isn't only the most important part of a magic show; it's what makes magic unique in the performing arts." A seasoned performer, he comes across as an amiable and approachable gentleman, an ordinary "guy next door" who nonetheless makes extraordinary things happen. Jay's greatest gift may be the way he brings magic to people with a richness and sincerity — exemplified by this emotionally intimate and playful participatory show.

I believe that Joshua Jay is one of the true illuminati, contemporary magicians who understand and embody the lesson subtly suggested with the phrase in magician David Devant's iconic poster: "All Done By Kindness."

I'm not the only one who loved Six Impossible Things. By public demand the show has been extended a few times; the next round begins in March. If you happen to be in New York, see for yourself how deep the rabbit hole goes.

Belly up to the bar for Stephen Molloy’s cocktail shaker take on the classic cups and balls magic routine: I was asked to share my handling here. Hope you guys enjoy :) (Instagram molloy894) from r/Damnthatsinteresting (via /damnthatsinteresting)