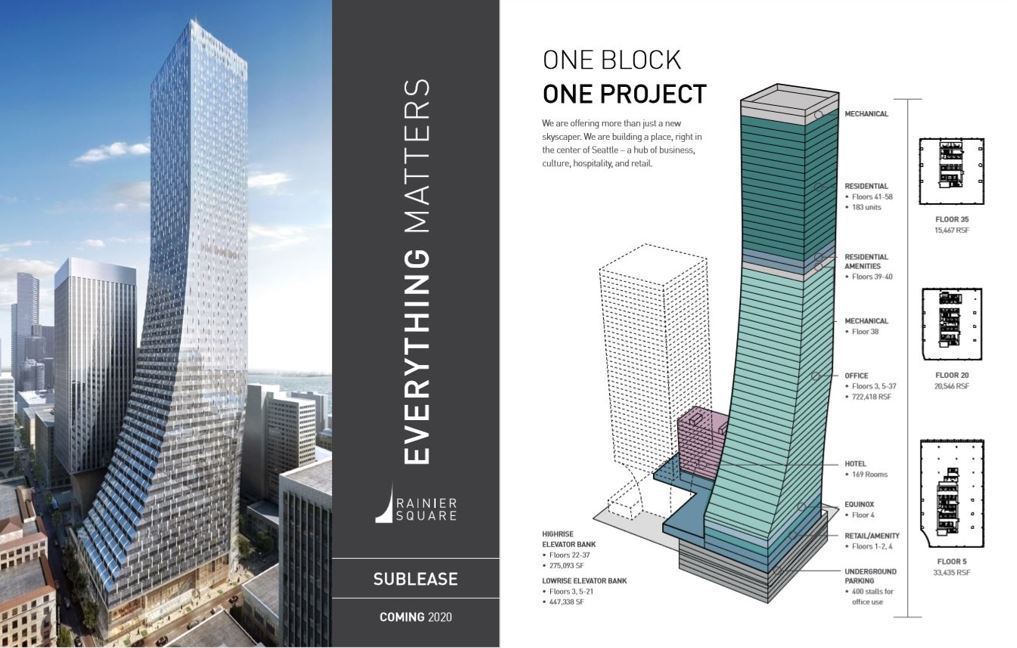 Seattle's immensely popular business tax was designed to do something about the city's epidemic of desperate homelessness, but then Amazon threw its muscle around to get the tax canceled, mostly by threatening not to occupy its new offices in Ranier Square, a 30-story building currently under construction that Amazon was to be sole tenant of, with 3,500-5,000 employees working out of the building.

Now, Ranier Square is advertising for new tenants to fill its 722,000 square feet, because Amazon has canceled its plans (though not the lease - the new tenants will sublease from Amazon, likely for 10-15 years). Unconfirmed reports have it that Amazon will instead expand its rentals in neighboring Bellevue.

Seattle has upcoming municipal elections and some city councillors are signalling that they'll campaign on reinstating the tax and raising money to help fix the city's housing crisis.

When Mayor Jenny Durkan and a council majority sought to compromise with business leaders in May by passing a smaller version of the tax, Amazon announced it would move ahead with Block 18, one of several new buildings going up in the Denny Triangle. But the company never recommitted to the Rainier Square space, even after an effort to nix the measure through a referendum, backed by Amazon and other local businesses, pressured the council into repealing the tax less than a month later.

The annual tax of $275 per employee on companies grossing at least $20 million per year would have raised about $47 million in 2019 for low-income housing and homeless services. Kshama Sawant, one of two council members who opposed the repeal, described Amazon’s Rainier Square announcement Wednesday as a “told you so” moment.

“This is a good reminder for us that backing down to the bullying of corporations never stops their bullying,” said Sawant, praising activists in New York City who protested tax breaks for Amazon, causing the company to pull out from its campus plans there. (Two Seattle council members, Teresa Mosqueda and Lisa Herbold, spoke at a New York event organized by Amazon opponents in January.)

“As the next step, people in Seattle should gather courage and renew our fight to tax big business for social housing,” Sawant said.