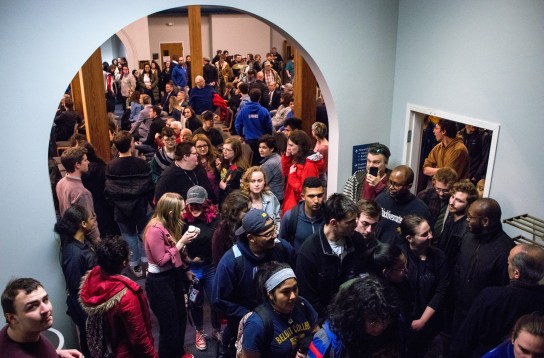 Genie Ogden writes, "Former Blackwater CEO Erik Prince (previously) was invited to speak at Beloit College last night, by the right wing group Young Americans for Freedom. A couple of weeks ago, a Beloit student who is Muslim posted on the internet that he was angry - about the shootings of fellow Muslims in New Zealand, and then about the YAF bringing Erik Prince to speak. He was suspended. Fellow students were upset about his suspension, and protested in the hall where Prince was scheduled to speak last night. They banged on drums, and some of them piled their chairs on the stage. Erik Prince cancelled his speech and has threatened to sue." (Image: Tess Lydon/The Round Table)