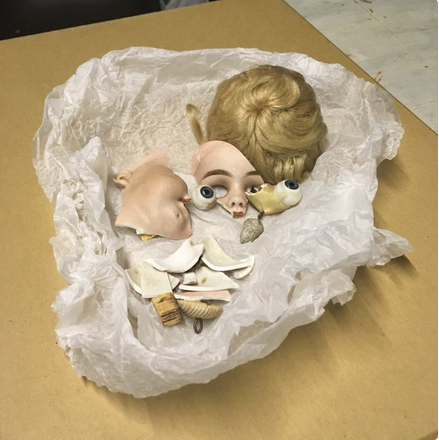 The Yorkshire Museum is issuing "curator battles" to to other museums. Their first salvo is #CreepiestObject. Yup, these and others in the thread, are pretty damn creepy.

Thanks for thinking of us @HottyCouture and wow, will we be having nightmares tonight with all these #CreepiestObject|s ! Here is the one we just can't hide from you, one of our many creepy gems – our Plague Mask (1650/1750)! #curatorbattle pic.twitter.com/JrMjqAJSIM

GUYS we know we have already won. This severed lower leg by Kerry Jameson has sprouted its own legs and a rather beastly head. @COCAYork #RethinkCeramics pic.twitter.com/Ip84aNacUX

Just when you thought it couldn’t get any worse, we present ....

Do you believe in ghosts? I don’t. But I do believe in the active powers of the human imagination, especially in an old, cold building filled with the world’s “acquired” ancient treasures and mummified humans.