Now I Know: Why an episode of Peppa Pig is banned in Australia 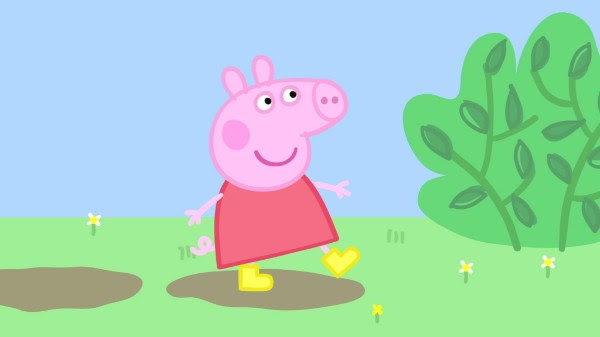 If you're a four-year-old in the United Kingdom, you probably know who Peppa Pig, above, is. The anthropomorphic, snorting pig and her family are a mainstay of children's television there -- and, increasingly, elsewhere -- with unrivaled popularity throughout Great Britain. Each episode features Peppa's family and her friends (and often the friends of her brother, George) exploring the everyday adventures that come with being a preschooler. Take, for example, Wikipedia's description of the first episode of the show's third season, titled "Work and Play:" "When Peppa and Suzy [that's Suzy Sheep, Peppa's best friend] learn that grown-ups must work all day, they decide to play at working in a store. But they quickly get tired of it." It's not very hard-hitting stuff, but little kids tend to like it.

As of this writing, there are four seasons of the show totaling 208 episodes, each of which is five minutes. (There's also a ten minute Christmas special.) One of them can be seen below…

… but if you’re in Australia, your major broadcaster doesn’t want your preschooler to watch it.

That episode is called "Spider Web." Wikipedia's description is short but to the point: "There's a spider in the house, so Mummy Pig tells Daddy Pig to get rid of it." The Pig family spend much of the five minutes discussing whether the spider should be able to live with them or not -- Mummy Pig wants it gone, but Daddy Pig notes that spiders eat flies and are therefore good to have around. Read the rest

The juice bottle that brought down an art thief

Most famous pieces of stolen art are stolen because they’re famous. But a 1949 painting by the Spanish Surrealist Salvador Dalí is famous because it was stolen.

How top colleges figured out how to turn away Jews

It never tastes quite as good as homemade. Dan Lewis blames the carrots.

Budget Cuts aboard Air Force One

In 1945 the US, China, and Great Britain asked Japan to either surrender or experience "prompt and utter destruction." A group of 1,000 Japanese military members were unwilling to accept either option. By Dan Lewis

World War II pennies were made mostly of steel. Dan Lewis on the rare and oft-faked coppers that made it out of the mint.

Dan Lewis on a gambling institution as elusive as it is downmarket. It's all to do with licensing, naturally.

Feeling the buzz: where do phantom phone vibrations come from?

That feeling of having your butt grabbed by a ghost isn't an isolated stigma. Everyone is getting ghost-fondled.

Where do bags go after the TSA takes them?

Inside job: the story of Witold Pileki, leader of the Secret Polish Army

Unknown to most of the world until the late '80s, Witold Pilecki was a leader of the Secret Polish Army. Dan Lewis on an all-round badass.

"You realize now when you work for Disney why the mouse has only four fingers -- because he can’t pick up a check." -- Robin Williams. Dan Lewis writes about how Disney went back on its word to Williams on Aladdin.

In 2009 a Philadelphia high school remotely spied on students through laptop webcams, wrongfully accusing one teenager of taking drugs. 50,000 photos later, the hammer finally came down on the peeping administrators. Dan Lewis reports.