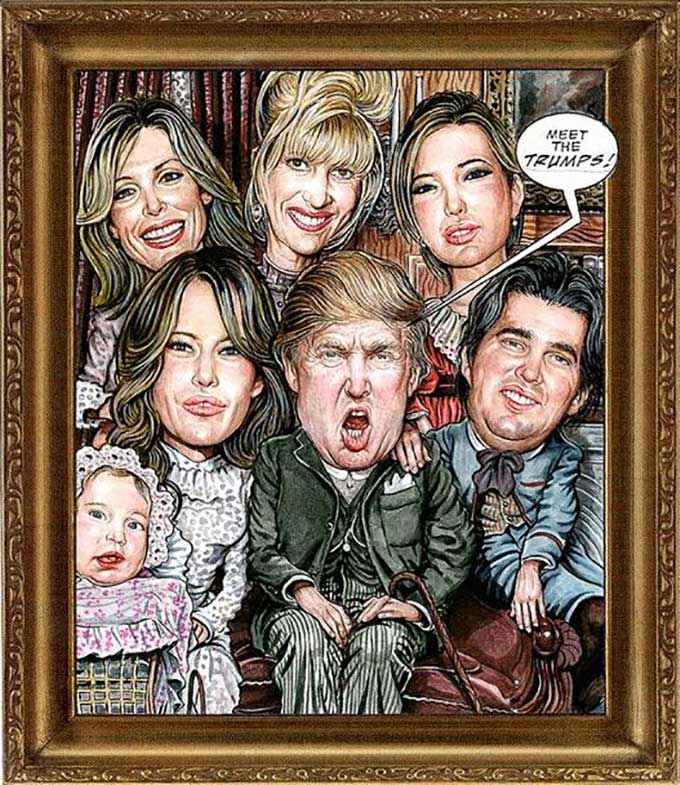 "Hi Drew, I'd really like to talk to you, but there are many far more important people here for me to talk to right now." -- Jared Kushner, publisher of the New York Observer

In 1987, Arthur Carter began publishing The New York Observer, the salmon-colored broadsheet covering NY politics, show business, gossip and media. The Observer's first editor was SPY magazine co-founder E. Graydon Carter. Journalist Peter W. Kaplan became the Observer's new editor in 1994 and one of his first objectives was to line up four artists to create the newspaper's weekly covers each month. Peter first called me with an assignment to draw senator Al D'Amato and we instantly hit it off, realizing we shared a mutual love of old comedy films, Frank Sinatra and MAD magazine. Peter soon lined up the great caricaturists Philip Burke, Victor Juhasz and Robert Grossman as his other cover artists. He referred to the four of us as his "Murderer's Row", referencing the unbeatable 1927 New York Yankees starting lineup. Working directly with Peter, The four of us would create weekly covers for the NY Observer, (the NYO), for the next 15 years, with Barry Blitt drawing the small black-and-white cover caricatures.

In 2006, 25 year old real estate developer Jared Kushner bought the Observer and Peter Kaplan continued on as editor. When I first talked with Peter about the new publisher, he seemed excited about the future prospects of the NYO with this young, wealthy new publisher, equating him to Orson Welles as Charles Foster Kane, purchasing a money-losing newspaper and injecting new life into it. Read the rest