Grant Morrison interview: "Laughter can banish any and all demons" 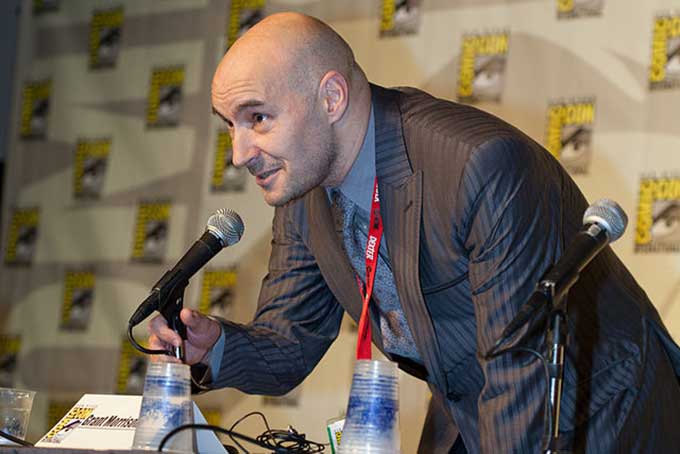 I first encountered Grant Morrison at the Disinfo.com conference of 2000, organized by Disinfo's founder, media magician, Richard Metzger [founder of Dangerous Minds]. As I walked upstairs from the basement hangout zone of NYC's Hammerstein Ballroom, at the beginning of his now legendary lecture, I heard Morrison's bone-chilling scream into the microphone, which reminded me of another Morrison, and thought "Who the fuck is this guy?' He then announced that he was drunk and had just eaten some hash and it was about to kick it in, all with a thick Scottish accent. Such punk rock antics won the rapt attention of the wild crowd, myself included, and over the course of the next hour or so, he voiced all the countercultural excitement of the moment. During that cold February day in New York City, Morrison's message was clear, Magick works, but you should not take his word for it, you have do it yourself to learn how it works.

What originally brought me to this two day conference was the fact that Robert Anton Wilson was the headlining speaker. Throughout the late 90s, and especially 2000, I was completely immersed in the works of three psychedelic philosophers, Timothy Leary, John C. Lilly, and most of all, Robert Anton Wilson. RAW was more than just a psychedelic philosopher, he was the greatest living writer that I'd discovered up to that point.

During his talk, Morrison exuded such optimism and joy that I immediately went out and read as many of his comics I could find. Read the rest

My favorite memory of Bob, hmmm. Late one night during one of many infamous Discordian Salons that Bob and Arlen hosted for their fellow writers, scientists and misfits, I found my gaze drifting to the window and out to the blackened sky beyond. There I saw a steady light hovering in the distance like some planet or star until, that is, it slowly dropped, made a ninety-degree angle turn and then, sped away at a 45 degrees angle out of view. I recall my mouth opening speechlessly thinking, "I just saw a UFO". At that moment, I looked across the room where I saw Bob looking right back at me, smiling with that Irish twinkle in his eyes. -- Antero Alli

January 11, 2012 marked the fifth anniversary of the passing of Robert Anton Wilson. January 18, 2012 also marks the 79th anniversary of Bob's birth, so this is a very good time to post this interview. For those who do not know who Bob Wilson was, he was an icon for being an iconoclast; as well as the author of over 35 books, including the Illuminatus! trilogy (Co-authored by Robert Shea).

Wilson described himself as a "model agnostic," who utilized "maybe logic." In other words, Bob was of the opinion that the maps we create -- i.e. mathematical formulas, words written down or spoken, pieces of art, etc. Read the rest