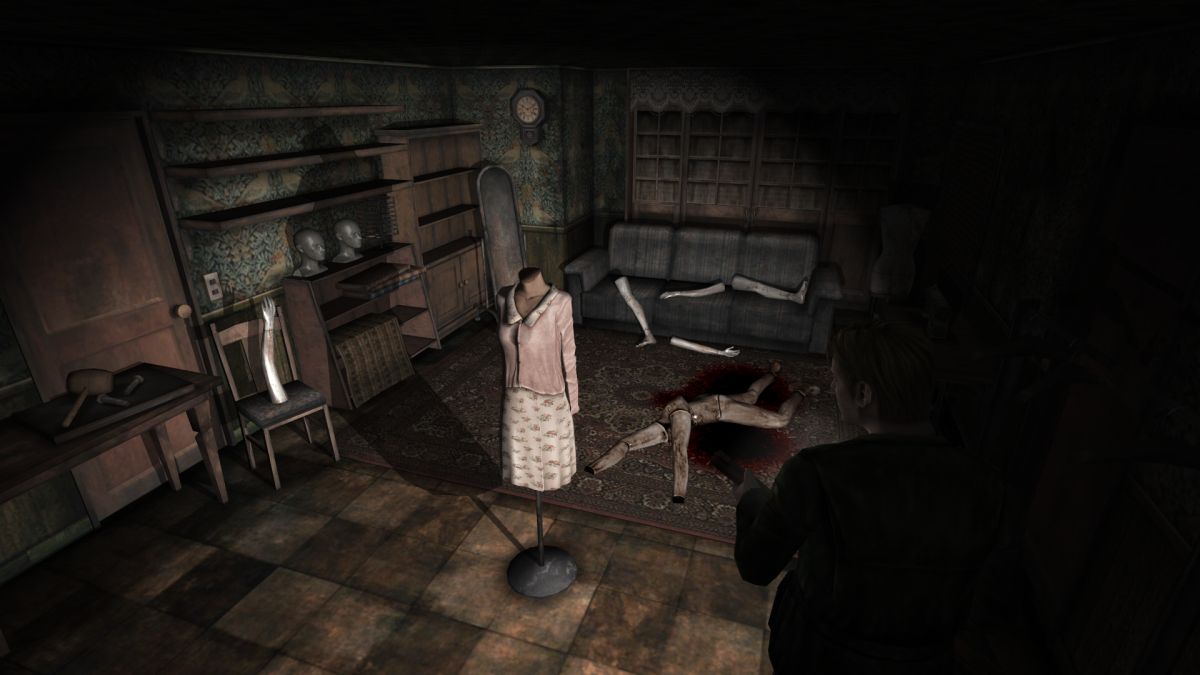 On the end of a great, mad era for video games

I have been trying all week to write about the Silent Hill series. But every day, the weather has been too nice. New Spring leaves unfurl a little more each day outside my window, the color of fresh life. There is clean sunshine and the sound of birds. You can’t think about Silent Hill at a time like this.

I dig deep into my memory: The soft-crunching rhythm of men’s bodies jogging languidly through fog. The fog sometimes gently drifted aside to reveal off-putting silhouettes on crumbling street corners, holding so still, as only the way things that are about to move will hold themselves. Mellow, mournful music. The awkwardly-typeset, ash-colored information: I G O T A H E A L T H D R I N K.

Let’s see, what else: Oh, that time when you were a father, running after your daughter: hey wait, stop, the bizarre, stilted voice acting of the 90s, sepulchral and unplugged and unbelievable. Almost funny, but then there was the fact that you couldn’t tell whether it was snow or ash falling from the sky. Or why the world would suddenly howl and glisten with rust and blood—it just wasn’t funny then, when you were sprinting to the rhythm of the unsettling, machinelike soundtrack and you couldn’t see what was in front of you.

You couldn’t control the camera, I mean. The Silent Hill video games were blunt and herky-jerky—you, backed into a corner, swinging a plywood board clumsily at two sets of mannequin hips bolted horrifically together, flailing at you. Clay-colored, faceless children grabbed at you in the dark as you tap-tap-jogged awkwardly in circles, desperate to regain some kind of control. The world fell silent for cutscenes, PlayStation glory-era wax-lipped women with empty eyes mouthing hollow dialogue at you from the mist and shadows.

It was all really bad and scary, and kind of broken, and everyone loved it, especially me.

There probably isn’t going to be any more Silent Hill. I mean, "they say" there will, but it's not going to be the same. The “fucking batshit” era of the great Japanese auteurs has officially ended, Wired’s Chris Kohler writes, with the departure of games’ longtime emperor-eccentric Hideo Kojima (whose utterly-inscrutable and infuriatingly self-indulgent Metal Gear Solid series I have always loved) from Konami. His exit means the collapse of the star-studded and likely inconceivably-costly Silent Hills, the planned franchise revival that now will never be.

The first Silent Hill game, about a man whose daughter disappears, came out the year that I graduated from high school. That was nearly 16 years ago. Silent Hill 2, the best one, is 14 years old. It features a woman’s blanched face on its cover, begins in an isolated, vile public toilet, and is about the spiritual purgatory of a grieving husband. It ends with him knuckling two weird eggs in slightly different shades of red, running down an endless stair to the sound of his dead wife’s voice.

Silent Hill 3 stars Heather Mason, a freckled girl with chopped hair and a quilted vest. She was the first girl I believed was a person in any video game ever. Her face, her plausible face, made me excited about what video games were going to become. At one point Heather gets shut in a room with a mirror, forced to watch her own image blacken with uterine tendrils. A cult tries to force her to be impregnated with a god.

Like a lot of games from two or three hardware generations ago, I don’t usually advise people to just go play them, unless they were there at the time. Playing old games, where you can’t control the camera, where you can’t control yourself, where grotesque textures chug across your frame of vision, is work for those particularly dedicated to appreciating video games and digital art.

It’s not really ‘fun.’ Sometimes I’m not sure if it’s even ‘good’. Reviewers at the time were not sure about Silent Hill games either, complaining that they were frustrating, that they copied Resident Evil, that they failed to push the ‘PlayStation’s graphical capabilities’ (but awarded the games ‘generally positive’ 80 and 90 Metacritic reviews all the same).

At first, I was a little bit surprised that the effective death of the brand as we know it, as we had hoped for it, was so important to so many people. Konami, Kojima, Silent Hills, trended madly on Twitter behind the news. People my age who are still interested in old video game franchises are increasingly outliers, I thought -- today’s console owners are interested in more modern brands, like, I dunno, Assassin’s Creed the seven-hundredth, when they own consoles at all (every young person I know plays his or her video games on tablets and computers and isn’t interested in having a system).

But people cared. On one hand, I shouldn’t have been surprised. It’s a trait of the core ‘gaming market’ to be slavishly loyal to labels, right? There are some things that people will never stop wanting, like a Final Fantasy VII remake or ever more “new Zeldas” or The Last Guardian, even after their modes have fallen long out of relevance, are probably not possible, even.

On the other, I don’t think it’s just tireless nostalgia-as-usual. There’s something more to the reverence of Silent Hill, the particular enthusiasm for the idea of Hideo Kojima as custodian of the bizarre and long-languishing brand (subsequent Silent Hill games often manage spotty flashes of brilliance, but have been increasingly-impossible to like). As Kohler suggests in his Wired piece, a beloved door feels like it’s closing on our history, the sunset of Japanese directorship in the game landscape.

This transition, mostly due to boring shifts in economic and market values, afflicts the horror genre most deeply. Japanese-led horror prizes the abstract, the unknown—ghosts in the family mansion, the secrets people keep from themselves, and all manner of accidental mysteriousness due to cultural gaps and differences in design priorities (bad translations, hollow voice acting and clumsy controls are often what makes these games feel so artful and disempowering, but were probably not intentional choices, as much as we wish they were). A world where Western development has economically and culturally dominated means that clean power fantasies and big-budget cap-and-slash are the norm.

We were raised on blunt, unpleasurable slogs through ill-lit rooms, desperately rattling locked doors. We now have elegant festivals of dismemberment, an arsenal of powerful weapons, and the villain’s motivations are always revealed and understood in full by the end. The scalpel-wielding nurses with their bandage-wrapped faces were a metaphor for entropy and sexual frustration, probably. I mean, we thought so. These days, you automatically tap-flick the fast zombie’s head off before it erupts in well-documented scientific mushrooms. Jog blithely down a corridor where the cover zones are clearly-marked. There were two Silent Hill movies: Visually impeccable, disappointingly literal interpretations of the canon.

Lately I was a judge at a game jam, and one of my fellow judges was a man who had been in the industry for a long time. While I preferred the weird apocalyptic text adventures on our slate, he advocated for the colorful multiplayer experiences he could see his own company potentially marketing on Xbox One’s marketplace.

”I make video games,” he reminded me, “and what I care about is the replayability, and the fun.”

The only quote I could find from Hideo Kojima about Silent Hills is: “We are aiming for a game that will make you shit your pants. If you don’t want to continue playing through the game, so be it. We don’t care.”

i feel your stress

Several months ago Konami released a demo of Kojima’s Silent Hills called P.T., for download on the PlayStation 4. It is horrifying and does not direct or assist you. You make convoluted laps of a decaying suburban hallway, scrabbling in the slick of afterbirth, or creeping in the silent darkness alongside the sound of a quaint radio newscast about a murder. Even though you walk the same small area over and over again, sometimes you are afraid to step forward.

It is absolutely amazing.

It made so little sense on its face that it launched stunning conspiracy theories and enthusiastic overanalysis, just like the old days. And now that P.T. is removed from the PlayStation store, it will slowly be lost to time, become the stuff of legend.

We just don’t have that anymore, now that video games make so much sense, so much business sense. They are so eloquently risk-averse, these days. For fear of needlessly glorifying a prior era, though, a couple of years ago I played through Silent Hill 2 again, to see how it ‘held up.’ I expected its quirks and flaws to loom large with time. I expected to be a little embarrassed at how much it had transported and impacted a younger me.

But somehow it was better and more beautiful. Though as uncomfortable to play through as a belly full of battery acid, it was somehow graceful in its age. Its rattling cages, its nauseating architecture, inhuman shapes. My radio hissing as a silent executioner in a red metal pyramid mask followed me down an apartment building’s fire stairs. My flashlight throwing a headless dress form into sharp relief, my wife Mary’s clothes still on it. The way I ran, with purpose, up the broad carpeted steps of a fateful hotel, almost to her room, only to suddenly come up against a rusty gate, the sound of my own name murmured urgently, sepulchral, from beyond it.

It was still good. It was once the game that made me want to write about video games. It still is.

It's Spring outside, and birds are sounding, and it is a fresh, sunny day. But let me be just a little bit sad at the end of an era.

You might enjoy MONA, a short fiction inspired by Silent Hill 2, written by me and illustrated by the amazing Emily Carroll. Buy it digitally on Gumroad or itch.io.