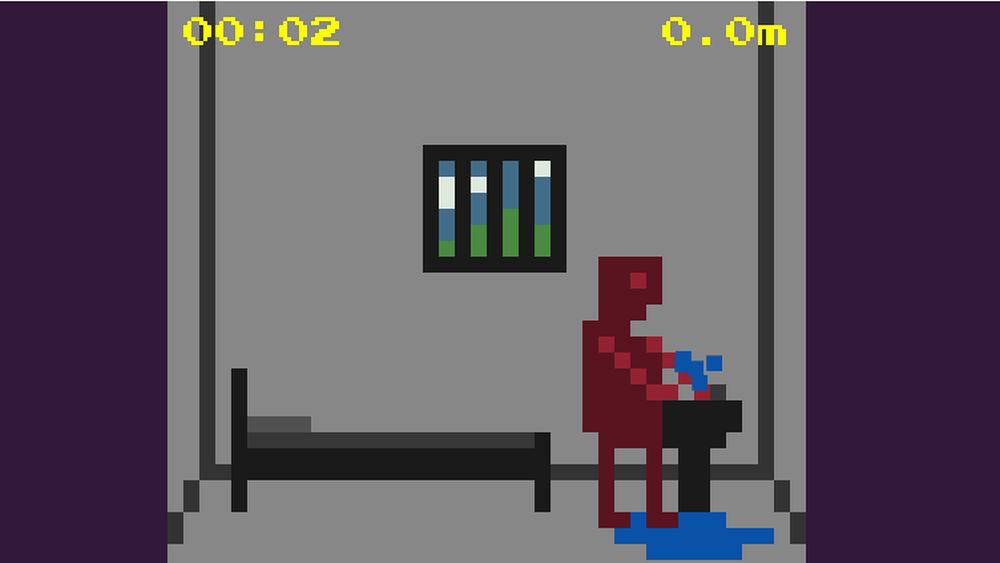 The first European Games are kicking off in Baku, Azerbaijan. This tiny web browser game stands in protest, highlighting the unlawful detention of political prisoners in the country.

Small games can be vital tools to capture public attention, highlight issues in accessible ways, and even help motivate people to act. Real Baku 2015, by designer and academic Pippin Barr, is a new, timely and beautifully-simple addition to this canon.

The first European Games kicks off today in Baku, Azerbaijan. But according to the International Federation of Human Rights (FIDH), the games are a public relations maneuver designed to help the country's president, Ilham Aliyev, manage his image and smooth over human rights abuses in the country.

FIDH aims to protest the unlawful detention of activists, journalists and other political dissidents in Azerbaijan by the government under Aliyev. In a recent joint statement, members of the European Parliament have already called for the release of these political prisoners, and urged people not to participate in or support the European Games while the unlawful detentions stand.

Azerbaijanis protest the European Games in March 2015. Image via Index on Censorship.

According to the Human Rights Watch World Report 2015, the recent year has seen a "dramatic deterioration in [an] already poor rights record" for Azerbaijan:

The Azerbaijani government escalated repression against its critics, marking a dramatic deterioration in its already poor rights record. The authorities convicted or imprisoned at least 33 human rights defenders, political and civil activists, journalists, and bloggers on politically motivated charges, prompting others to flee the country or go into hiding. Authorities froze the bank accounts of independent civic groups and their leaders, impeded their work by refusing to register foreign grants, and imposed foreign travel bans on some. Many of those detained complained of ill-treatment in police custody. Many organizations, including several leading rights groups, were forced to cease activities.

FIDH partnered with Paris-based PR firm Agence Babel—which worked for free—to develop and commission a simple game concept the orgs hoped would spread awareness about the troubled environment around the European Games and the situation for political prisoners. These types of games, sometimes called newsgames, rely on the idea that inviting people to play with systems has the potential to offer them a better understanding of events than simple reading. It's also thought that games can invite or encourage attention from people who wouldn't normally tune in to world news or social issues.

Pippin Barr, whose minimalist works often use simple structures to examine attitudes about art and pop culture, was chosen to develop Real Baku 2015. You can play the game for free in a web browser, and it takes just a few seconds to try once.

You decide whether you're playing as a lawyer, a journalist or an activist, and against the bleak and simple palette, you select a competitive sporting event you'd like to perform. You must then attempt it inside a jail cell. The message is instantaneous and clear: to a political prisoner, these games are an insult.

The mode of input is delightfully efficient, and requires no special skills: You're given 10 seconds to click your mouse as rapidly as you can, or sometimes, like when doing a "high jump" on your prison bed, to click and hold. The game interfaces, timing you and counting your meager "points", highlights the inevitable futility of your performance. For example, if you choose to compete in "swimming" you'll be splashing in your jail cell sink, the game always chortling DISTANCE: 0.0 at you no matter how frantically you click. Choose to compete in "boxing", and watch the game count up all your punches that never land.

As it often is, Barr's work here is an example of how much games can do with quite little, offering effective communication tools and rich existential frameworks with just a tiny web window and a button press. When finished, the game also acts as a portal to social media sharing on the issue, or to FIDH's digital appeal.

Play the game and share it with someone you know. As the game industry turns the majority of its attention toward the next week's E3 consumer announcements festival, it's nice to remember the full breadth of what our medium is good for. And if you're interested in newsgames, definitely read this in-depth piece by Simon Parkin at the Guardian about 1000 Days of Syria, an interactive fiction game about the Syrian Uprising.