Manyland, a universe we draw together 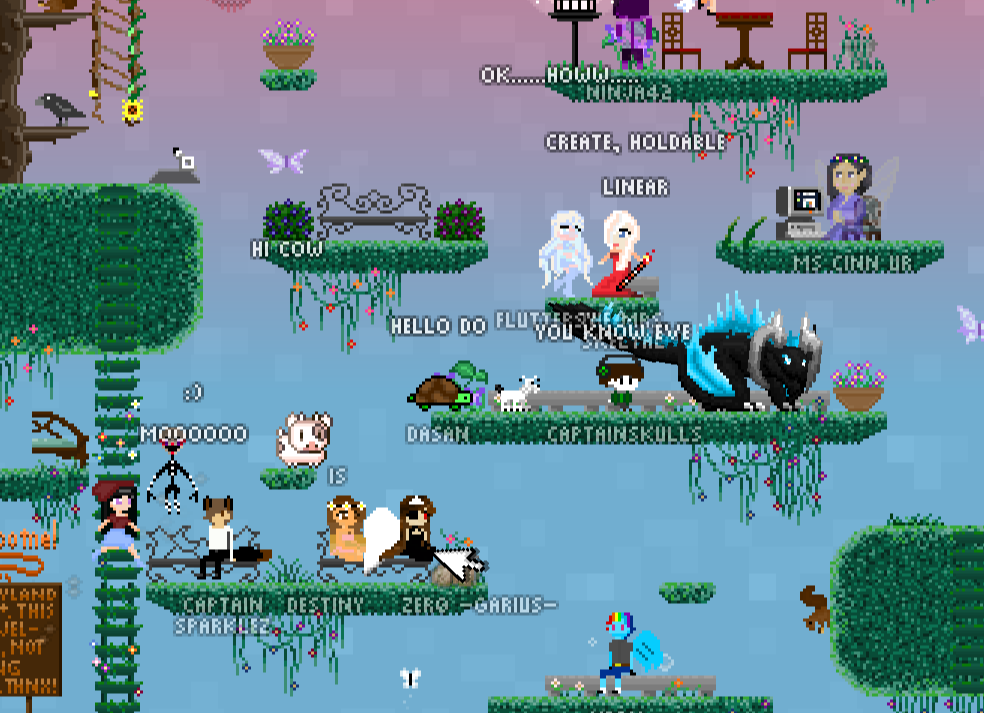 Manyland, a universe we draw together

We're making an infinite, shared universe where what you draw becomes real.

Manyland is a two-dimensional world right in the browser. By opening the pixel editor, you can create anything you want, and place it back in the world for everyone to see, collect, and use.

From the outset, Manyland was created as a blank canvas: no predefined theme, story, or goals. No points to win, currency to be made, or awards. No ready-made creations. No external challenges or timers. Just a big dark sky waiting to be filled with people’s creations. A peaceful place that raises the question: what do you do if there were no monsters to fight, no resources to mine, or pets demanding to be fed? What do you do when you are not in a game, having to overcome game-like obstacles? What do you do if it’s as easy to create a green unicorn riding a UFO as it was to create a fantasy sword?

We put up a few houses and bridges so people wouldn’t fall, and when Manyland launched, we had absolutely no idea what would happen. And that’s when the fun started.

A world that’s infinite in all directions allows limitless movement and building, but that’s not without its own challenges. Soon after launch, the first people arriving started building so far and fast in all directions, they rarely ran into anyone! There was no single spawn point, but rather a random universe-wide spawning in places people had recently roamed. Some walked for days without seeing another soul... it wasn’t even easy to realize that Manyland is a shared universe. (Back then, we sometimes spawned near people just to say Hello, and we apologize for any shock caused!)

At the time, all of Manyland was shared territory, so if you build somewhere, the next person could remove the block. Placements established for a longer time leave dust, so the person whose block was removed can later undo the change if wanted. A voting system among people helps with self-governing.

And sometimes, Orctown found that after a few days it had a new neighbor – Amsterdam in all its diversity – just a few blocks below it. This is crazy and fun, but people started demanding areas with more specific building rights to be set, and more space around them. So now, there are an infinite number of areas surrounded by minfinity… a distance so large, it’s impossible to ever reach the end. People have tried to go as far up as possible. I believe the current climbing record is in the vicinity of 100,000 meters.

Naturally, in an open world, not everyone will be your friend, and some people try to troll it. But there’s also less well-defined cases of actions which one person may find ok, and another not. We’ve added a variety of tools over time to help people feel comfortable. Location is one of the most important aspects in all this, and can be changed more easily and gradually than strictly defined friendship circles. You might be in the mood for some lone time in the morning, hanging out with a best friend at noon, and going to a busy party to meet new people at night, all without having to send friend requests, shift around groups, or mute someone.

A set of early features we have removed by now was a visible upranking
system, a karma bar, and the downvote button. Up until recently, these
were tools where everyone could express disagreement with another
person and monitor one’s standing. Get too many downvotes, and
building is limited, or certain blocks aren’t creatable anymore. We’ve
now taken out most of that, and restricted it to just an upvote button
(a report flag and an area lock button for your places can still
handle urgent cases). This made for less second-guessing, and much
more peace.

A lot of our etiquette has evolved in everyday conversations. Manyland has see-as-you-type chat (if you had the chance to try Google Wave, you might have seen something similar). We also have in-world forums, which are another block type you can create and place in an area to discuss with others. (You can also share YouTube or Vimeo videos, Imgur, or embed other websites… look for Boing Boing in Blogville!)

People in Manyland, the Manyzens, have had a lot of great ideas for new block types. We started with a few basic ones: liquid, solids, walls, buttons and doors, bouncy or slidey blocks. Environmental effects like rain or snow, and light. Now if you arrive in Manyland you can also create your own body, mounts, items, consumables… script interactive blocks to create adventures and quests… record songs with instruments to turn into a new shared music block… create animations, particle effects, stories, portals and more. All block types are intended to be like Lego bricks: we don’t know what you will do with them, so it becomes a world of surprises.

Talk about surprises. There are now over 100,000 different areas and millions of placed blocks.

No single map can cover it all, but one Manyzen, Azuros, created this time lapse of the spawn point, showing how structures change…

I’ve quizzed some of the people in Manyland about what this universe means to them, and what projects they have created in it.

Nicole is one of the organizers of Manyday, an event set up by people on the 19th of every month (inspired by Manyland blocks being 19x19 pixels). She says, “Manyday is a celebration of creativity in all forms … Each month we pick a theme and create an area – we've done Under the Sea, Murder Mystery, Fairy Tale Forest, and Corporate Mayhem so far. Each area has a few key parts: The stage, where we announce all the activities, and sometimes hold body contests where players show off their motions and dynamics; a few games we put together using interactings (such as an enchanted apple orchard where golden apples get more points than normal or wormy apples).” Nicole adds, “Our contests are open to everyone and we keep the rules simple and open – the point is to have fun creating art, music, stories and more.“

JoOngle, who made an area called Electronics, says he enjoys that
Manyland has friendly people of “all ages, all genders, all types, all
over the world.” He says he likes the direct feedback during
developing an area, where “some have been a total flop, and some have
been a total success.” Amar, a programmer with an interest in AI,
collaborates with artists in Manyland. Asked about his projects he
says, ”Using the Brain item type – programmable in JavaScript – I
created autonomous ‘bots’ that can teach themselves how to achieve set
goals with recurrent neural networks.”

Godiva, who joined Manyland during the early days after the game Glitch had shut down, says “Since I started using Manyland I had been fascinated with the potential for creating entire game worlds using the software, similar to how Garry's Mod started as a project for a different game. Inspired by my love of virtual pets, I tried to push the boundaries of what was possible.” Godiva created an area called Super Monster Land “experimenting with different combat systems, AI, and even a functioning breeding system.”

Manyland is a labor of love. It’s a bit costly to run at the moment, server bills and all. We dislike a lot of popular phenomena like timers, virtual currencies limiting everything, or pay-to-win. There’s a single top priority: the happiness of everyone in Manyland. We really hope to put this universe on a stable fundament and just introduced a voluntary Backers system, and are also open to other funding options. If you have a bit of time, we would love to say Hi to you in Manyland!