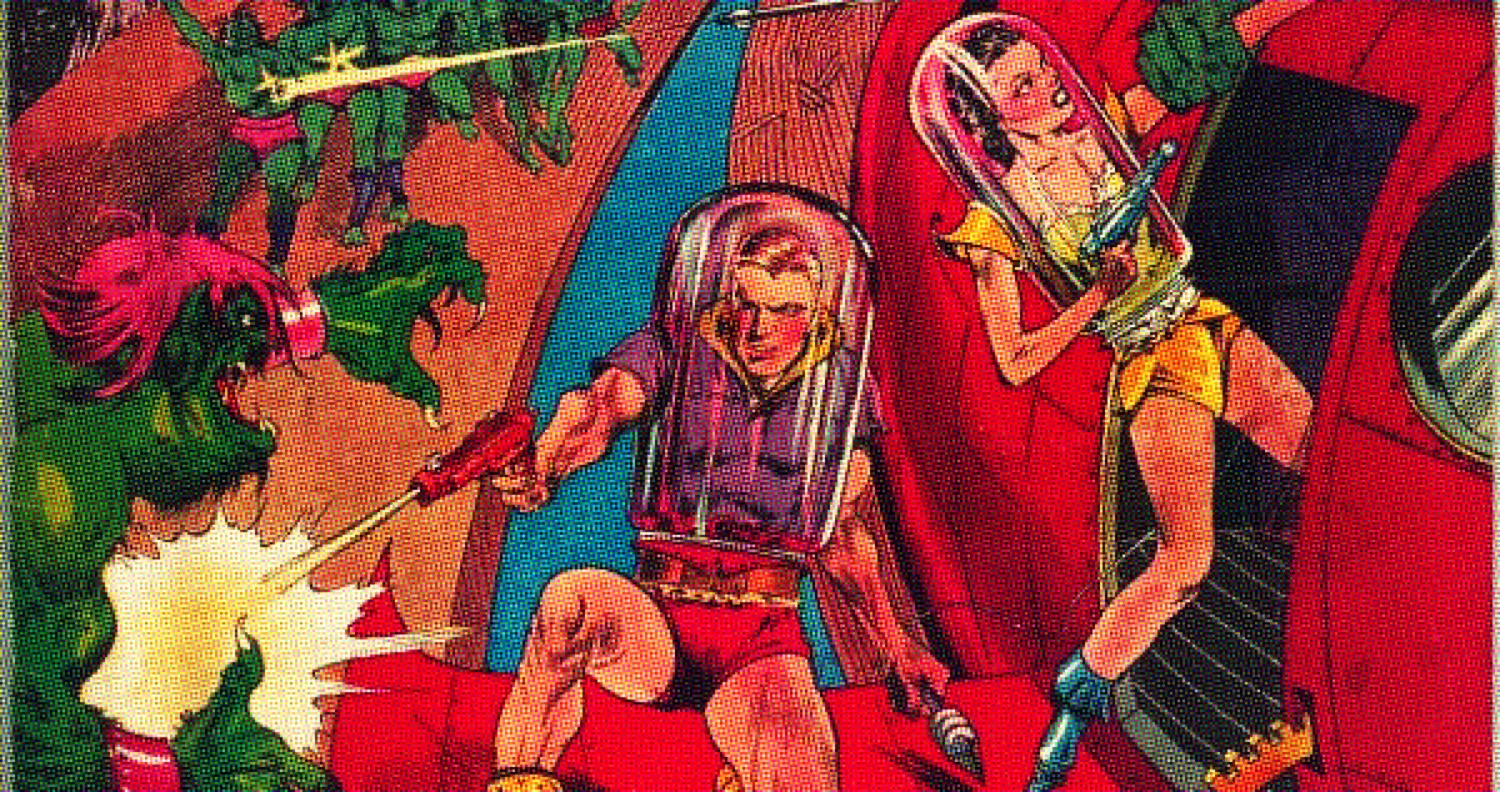 Author and former CIA officer Barry Eisler spoke at the Association of Former Intelligence Officers opposite ex-CIA and NSA director Michael Hayden on Monday. In front of about a hundred former CIA, FBI, and NSA operatives, Eisler talked about bulk surveillance, whistleblowing, and why intelligence professionals need to take especially great care not to let propaganda pervert their intelligence.

“The whole thing was fun and a little surreal, and if I got a few people to look at these issues in a different light, I’m glad,” says Barry.

You can read an adaptation of his remarks in this Boing Boing post.

“Unfortunately, the event format was such that no real debate with Hayden was possible. Frustrating, because, for example, at one point during Q&A Hayden opined that Iran is the world’s greatest purveyor of terrorism.”

“If I could have responded, I would have wondered aloud, as I like to do from time to time, how I’d explain an assertion like that to a Martian....”

Martian: We on Mars are confused by your General Hayden’s comment. He is speaking of Iran, is that correct? A country with the GDP of Finland?

Martian: But didn’t your Martin Luther King say almost sixty years ago that the greatest purveyor of violence in the world today is America?

Martian: And hasn’t America had innumerable additional wars since then?

Martian: But then America’s wars must not be terrorism.

Martian: That is fortunate, for our understanding on Mars is that America spends more on its military than the next eight nations on earth combined--five of which are American allies.

Me: Yes, we do have a large military.

Martian: Do you not maintain over 800 military bases—more than any other nation
in your planet’s history?

Martian: Watching from Mars, we have always associated overseas military bases with what you on earth call “empire.”

Me: Americans don’t want an empire.

Martian: Why then do you maintain so many overseas military bases, as empires do?

Me: We just want to keep the peace.

Martian: We have a joke on Mars…we like to say, “Iran must want war, otherwise why would they have moved their country so close to America’s military bases?” You see, we find this funny because of course a country cannot be moved, and in fact it is the military bases that have been created all around Iran, not Iran that has moved its country close to the military bases.

Martian: And do you not also accuse Iran of “meddling” in Iraq, a country you bombed, invaded, and occupied with a quarter million troops, a country that is on the other side of the Earth from you but adjacent to Iran, a country that your last four presidents in a row have bombed?

Me: Yes, you do see that word used in magazines like The Economist. They mean Iran is funding Iraqi politicians and infiltrating Iraq with spies.

Martian: So this “meddling...” it is worse than invading?

Me: It’s...complicated. But really, America is a peace-loving culture.

Martian: But you have more wars than anyone. On Mars, this does not seem peaceful.

Me: Okay, but it’s not terrorism. Terrorism is when, you know, you terrorize people.

Martian: But did you not, alone among the peoples of your planet, use atomic weapons against your fellow humans, when you bombed Hiroshima and Nagasaki?

Me: Only to end the war.

Martian: Did you not kill at least 600,000 civilians in your war in Vietnam?

Martian: Did you not kill at least 100,000 civilians in your latest war in Iraq, and turn four million people in that war into refugees?

Martian: And did not your former Secretary of State Madeleine Albright declare that a half million Iraqi children starved to death because of American sanctions was “worth it”?

Me: She did say that, though she took it back afterward.

Martian: And is it not the case that—

Me: Okay, look, I get it. America does more war and violence than anyone else. But it’s not about terrorizing people, okay?

Martian: But are not the people you kill terrorized? And what about the parents of dead children, the children of dead parents, and the burned, blinded, brain-damaged, crippled, maimed, and mutilated by your weapons? Our understanding of humans is that you are terrorized by such things.

Me: I guess so. But it’s not like we’re trying
to terrorize.

Martian: But did you not call your own tactics in your second war in Iraq “Shock and Awe”?

Me: Well, yeah. We were trying to, you know, shock and awe them.

Martian: Perhaps the problem is our imperfect renderings of Earth languages. In Martian, we cannot distinguish between terrorizing with bombs, and shocking and awing with them.

Me: Look, I see where you’re trying to go with this, okay? But we’re not like ISIS and other terrorist groups. I mean, you know what ISIS does? ISIS burns people alive. That’s terrorism.

Martian: But in your war in Vietnam, did you not use an incendiary weapon called Napalm, a kind of jelly gasoline that sticks to human bodies and causes horrific burning?

Me: I guess, but that was a long time ago.

Martian: But do you not currently deploy what your
refer to as thermobaric weapons?

Me: I don’t know that word.

Martian: It is derived from two Greek words meaning “heat” and “pressure.” In English, it refers to a type of explosive that produces an exceptionally hot and powerful blast. The lucky victims are obliterated. The less lucky suffer terrible agonies before they die.

Me: Well, I’m sure that isn’t our intent.

Martian: But you have named one such weapon the “Hellfire” missile. Does this not mean you are well aware that the missile burns
your fellow humans with fire? Was it not in fact designed to do so?

Martian: We do, but our translators have struggled with it. For a long time, we failed to understand why a people who are ordinarily so plain-spoken would devise such a vague phrase. Then we realized, you Americans find such a phrase preferable to something like, “the burning to death of innocent human beings, the blowing into tiny scraps of meat and bone ordinary people just trying to live their lives, the ripping asunder of the limbs of children, the blinding and mutilation of baby humans—”

Me: Right, I get it. But, yes, it’s not like
we want those things to happen. When we do them, they’re tragic accidents.
That’s the difference.

Martian: Perhaps we Martians are simply dense. It seems that terrorists have goals for which they will kill. Is that not also true for your country?

Me: Yes, but again, the terrorists want
to kill innocent people.

Me: I don’t understand.

Martian: I am trying how to understand how it is different for you, given that you are the “good guys,” to use your Earth phrase. Do you not also, in all your wars, kill people as a means?

Martian: In such circumstances, it is sometimes difficult for we Martians to distinguish between the concept of “want” and the concept of “willing.” For in the service of the geopolitical goals you seek to achieve through the means of violence, is it not an empirical and historical fact that inevitably you will kill hundreds of thousands of innocent people, inflict the most horrific injuries on hundreds of thousands more, and turn millions of people into stateless refugees, with all the terrorizing that such events necessarily entail?

Martian: But this is not terrorism.

Martian: I confess I am more perplexed now than when we started. I do not understand how the nation that commits the most violence and causes the most terror can claim other nations are the most terroristic. We Martians will have to study this question more closely.