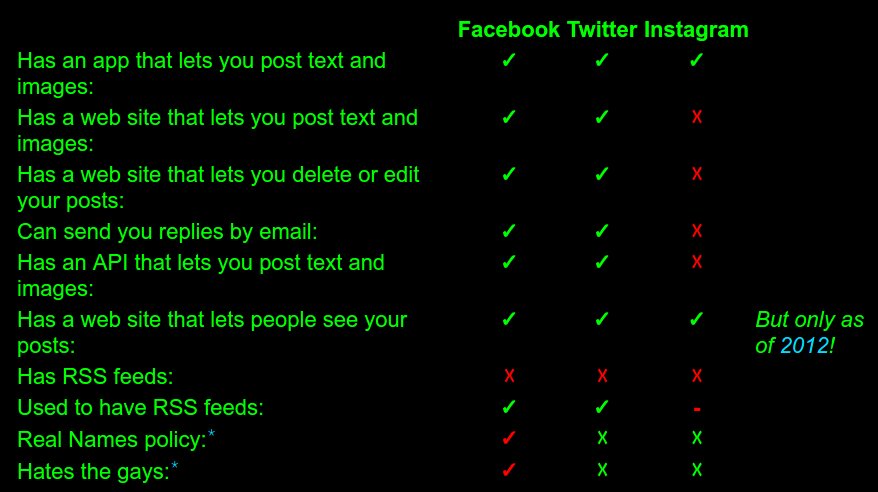 JWZ reminds us that all social media is some variation on the walled garden strategy, designed to lock you in and lock value away from the open, interoperable Web into a silo where it languishes and rots. You know, AOL.

The thing that makes the Internet useful is interoperability. These companies hate that. The thing that makes the Internet become more useful is the open source notion that there will always be more smart people who don't work for your company than that do, and some of those people will find ways to expand on your work in ways you never anticipated. These companies hate that, too. They'd rather you have nothing than that you have something they don't own.

Instagram didn't even really have a web site until 2012! You may not remember this, but it didn't used to be possible to see Instagram photos from a web browser at all.

If that doesn't sound insane to you, I can't help with your problem.

Now don't get me wrong, Facebook is by far the worst of the lot. This is largely due to their size and power, but the fact is that they shit on their users far more than the others do. This is a quantitative difference, not qualitative, but it's still extreme. As I've said before, if you work for Facebook, you should quit; it's the only morally defensible thing for you to do.

But wow, Instagram's design decisions are among the most user-hostile and Internet-hating that I've ever seen.