It's the criminal economy, stupid! 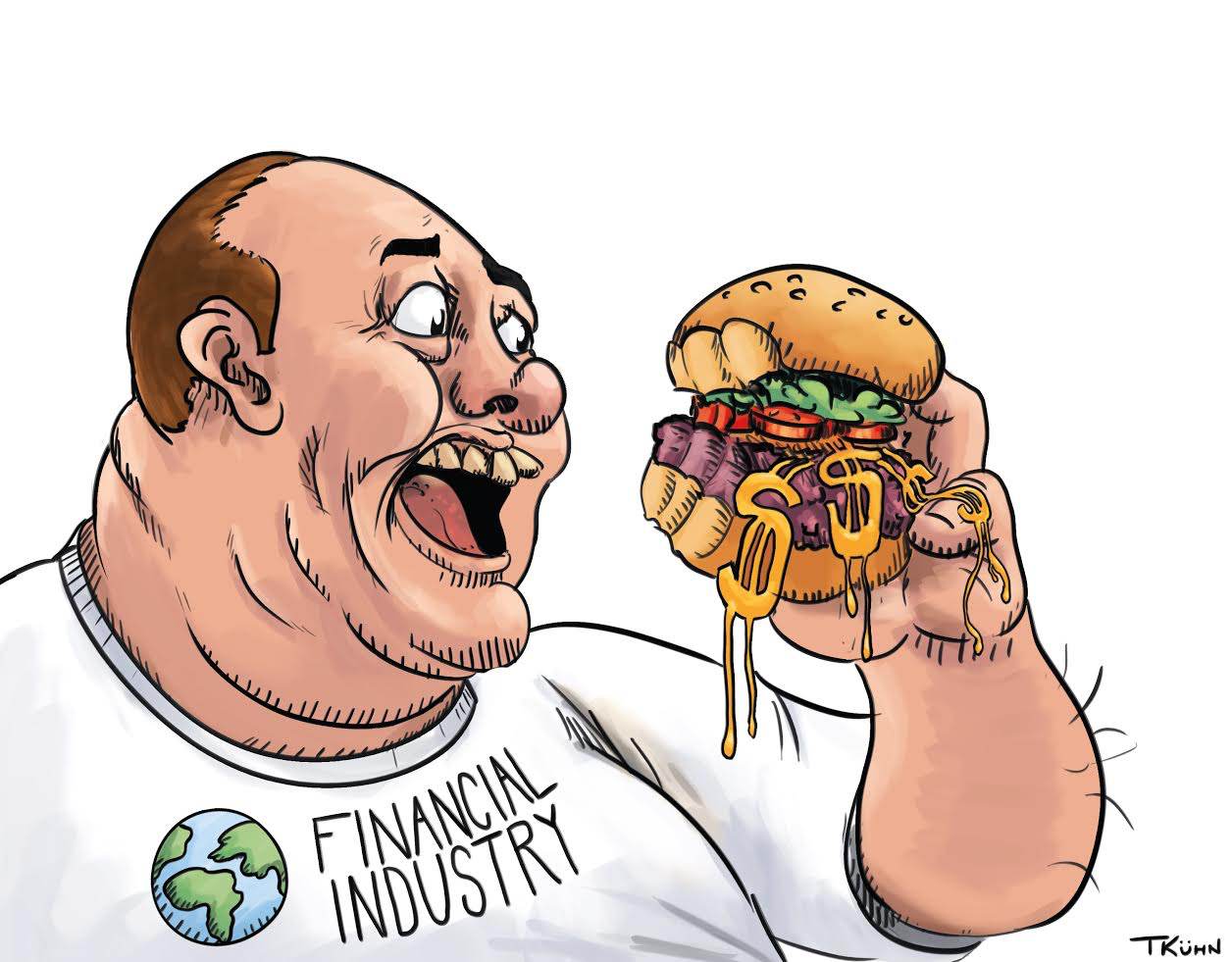 It's the criminal economy, stupid!

By Kathi Vian and Mark Frauenfelder

The Panama Papers — a massive cache of 11.5 million records leaked from the law firm Mossack Fonseca — reveal that several heads of state have been sheltering their personal wealth in offshore accounts to evade taxes. This is not surprising, as dictators are known for draining public coffers and hoarding the ill-gotten funds in secret accounts. What’s more disturbing is learning that well-known global businesses and civic leaders have been doing the same thing for decades, and getting away with it.

Mossack Fonseca specializes in setting up untraceable shell companies. There’s nothing overtly illegal about them, but they’re often used by political and financial elites to hide assets, dodge taxes, and launder money. Creating shell companies is a big business, and Mossack Fonseca is just one of many firms that do it. FACT (Financial Accountability and Corporate Transparency) Coalition says shell companies house up to $21 trillion globally. (By way of comparison, the US gross domestic product for 2015 was $18 trillion.)

Too Big to Jail

The firms employing the services of Mossack Fonseca include a rogues’ gallery of brand name corporations with a track record of breaking financial regulations with virtual impunity. Remember back in 2013 when HSBC was slapped with a $1.9 billion fine by the U.S. Justice Department for laundering drug cartel money? Its fine amounted to less than one tenth of its annual profits. And remember when UBS was caught in 2012 spreading false information to manipulate banking exchange rates? It was fined $1.5 billion, which sounds like a lot, until you learn UBS’ revenues are almost $40 billion a year. Both banks are clients of Mossack Fonseca.

The reason banks and financial institutions are ignoring regulations comes down to simple economics. The organized criminal economy is over $2 trillion a year, and someone has to launder it, says journalist Drew Sullivan, co-founder and editor of the Organized Crime and Corruption Reporting Project (OCCRP) and a 2014 Institute for the Future (IFTF) Fellow. “You can either be a bank that takes that money or a bank that doesn’t take that money. Because nobody is penalizing you seriously for this, and nobody holds it against you, you don’t get a reputation of being a bad bank, and you can keep doing this.”

These slap-on-the-wrist fines are simply the cost of doing business, says Sullivan, who compares the bank’s criminal behavior to the Koch Brothers’ modus operandi: violate sanctions and fight the fines in court for as long as possible. “It’s a risk minimization plan, rather than honorable business,” he says.

The Collapse of the Legitimate Economy

The fact that these financial institutions can get away with wildly criminal acts makes it clear that something is very wrong with the way business is being done around the world.

It’s as if the entire financial industry ate a black market hamburger contaminated with prions. Those billions of dirty dollars are a fast-acting version of mad cow disease that turns institutions and their regulators into corrupted host bodies for worldwide tax evasion, slave trafficking, weapons trading, money laundering, and fraud. And we are paying a steep price for it. Global Financial Integrity’s December 2015 report found that “developing and emerging economies lost US$7.8 trillion in illicit financial flows from 2004 through 2013, with illicit outflows increasing at an average rate of 6.5 percent per year — nearly twice as fast as global GDP.”

There’s no longer a line to be drawn between the legitimate economy and the criminal economy. The Panama Papers clearly bring this to the fore. Many so-called leaders of the civil economy whose job it is to create and monitor the legitimate economy — and to penalize those who step outside it are themselves a part of the web of global corruption. The liberalization of trade and finance often gives get-out-jail-free cards to everyone from the drug growers of Mendocino County, California (their transgressions overlooked by elected sheriffs) to large corporations who build the greater share of their profits, not from the products and services they produce, but from the investment of their large stockpiles of money.

It’s no accident that the large global corporations have been steadily jettisoning their workforces since financial deregulation began in earnest in the 1980s. While the problem of unemployment is often laid at the feet of factory robots and their algorithmic bosses, the truth is that big companies don’t need a big workforce to build profits from investments. They can just as easily (or more easily) profit from stashing money, preferably cash, in various tax havens, instead of investing them in productive activities. It is easy to hide the money in places where they can’t actually be traced and therefore taxed by the officials charged with taxing it. Oh wait! They’re hiding their cash flows, too! This confederacy — one might almost call it a conspiracy — of the corporate, civil, and criminal economies has not only produced the high-profile criminal acts revealed in the Panama Papers, it has also hollowed out the opportunities for all but the relative few who can afford to play the investment game and created the conditions for the growth of the criminal workforce.

The Future of Legitimacy

We can’t expect governments alone to solve the problem, especially when government leaders are often entrenched players in the crooked game. And traditional modes of civil engagement — voting, protesting, civil disobedience, or even acts of violence — are unlikely to bring about the broad resurrection of legitimacy that will be necessary to reinvent a trusted economy.

Organizations like the OCCRP offer a new model for turning the tide on widespread financial crime. The OCCRP goes beyond simple naming and shaming, which often isn’t enough to make crooked companies clean up their act. You also have to “hack and track,” says Sullivan of the OCCRP, whose organization joined the International Consortium of Investigative Journalists and more than 100 other news organizations to conduct the yearlong investigation that led to the release of the Panama Papers. “Basically, what we do is we follow them all around, and track them through public records and other data sources, and show exactly what business dealings they’re doing, and who they’re working with,” says Sullivan.

Distributed reporting organizations like the OCCRP “will increasingly assume the role of de facto regulators and drive demand for increased levels of transparency in the political and financial systems,” writes Gorbis in her book. When these organizations realize that their behavior is being scrutinized by the entire world, they’ll be better corporate citizens.

In addition to public tracking efforts, a multitude of experiments are being undertaken that do away with the need to trust companies to do the right thing. Applications that run blockchain technology have the potential to generate databases of immutable ledgers that allow anyone to view the flow of money from one place to another. Blockchain technology is used by Bitcoin to validate transactions (including illegal money transfers), but blockchains can also be used to track asset transfers, and enable smart self-executing contracts and distributed collaborative organizations as alternatives to human bureaucracies prone to graft.

Ultimately, to fight global corruption, we need to rebuild our civic imagination. Institutional corruption is the root of our global, social, and economic malaise. We need to go beyond the polarized debate of public vs. private, of government vs. business, because both of these poles are already clearly corrupted. We need to reach deep into our collaborative, empathic psyches to find new ways to negotiate a global commons in which we collectively, repeatedly, and with great creativity reimagine what a legitimate economy can look like.

The trillions that the global looter class has stashed in offshore financial secrecy jurisdictions are protected by the joint tactics of absurd complexity and stultifying dullness, which have been created by a separate group of global looter-enablers, working for big accounting and audit firms, banks, law firms, even private schools.

New Zealand is one of the Five Eyes countries (UK, USA, Canada, Australia, NZ) who collaborate on mass surveillance, and it has a notoriously off-leash, invasive surveillance apparatus that has been caught spying on NZ Greenpeace, the NZ Green Party, the Mana Movements and anti-TPP activists; the state was also caught giving private corporate spies […]