No More Prizes in Cracker Jack :( 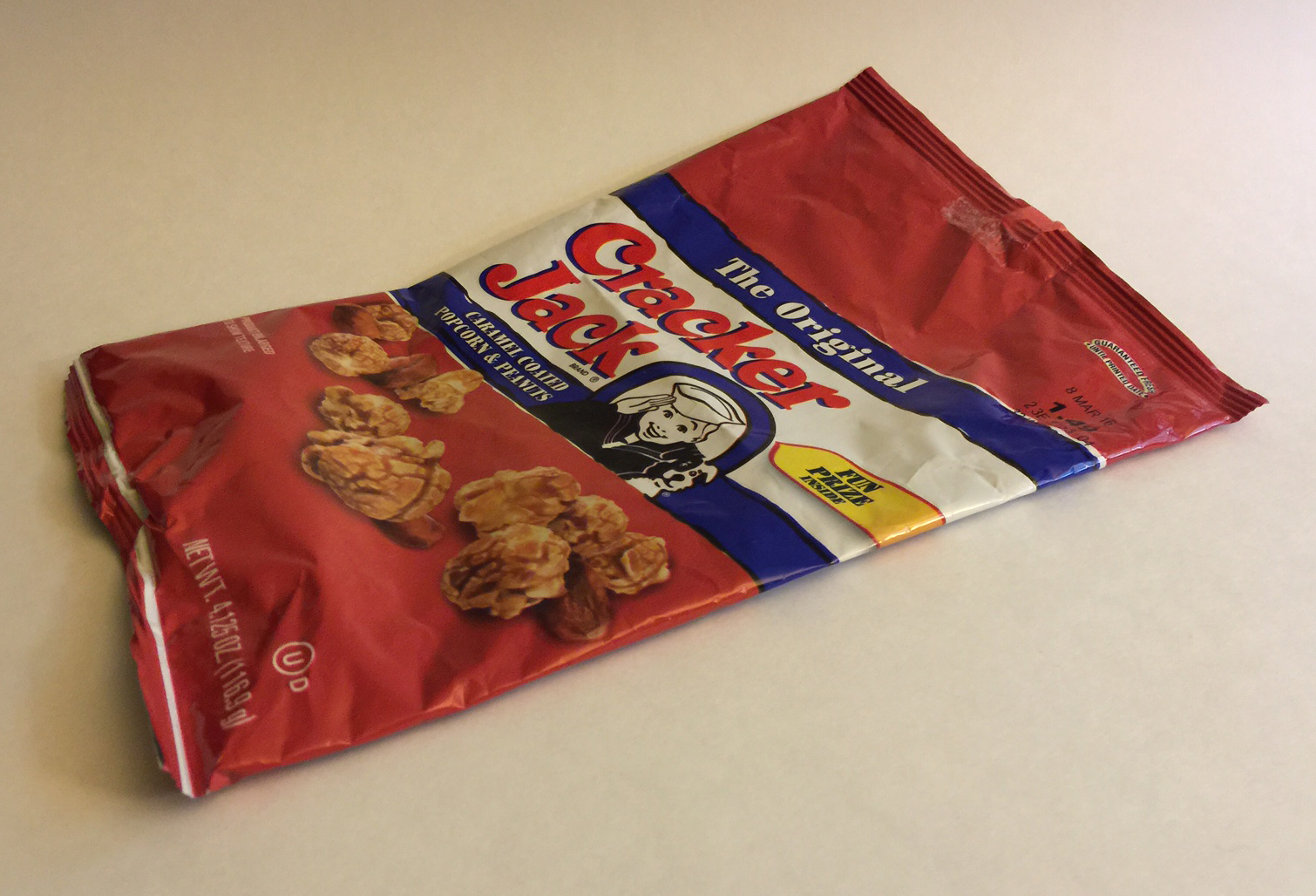 Have you tried to find a box of Cracker Jack lately? You can buy boxes online or if you trudge to Costco (and are forced to purchase a bulk package of 24 boxes). Other than that I haven’t seen Cracker Jack come in anything other than a bag for ages.

I don’t like change, particularly when it’s for the worse, as it often is because almost everything these days is dictated solely by how many more fractions of a penny a large corporate entity like Frito-Lay (which owns Cracker Jack) can squeeze out of any product. You consistently pay more and get less. You know about that, right? For years large corporations have been reducing the size of the package and simultaneously increasing the price — this happens with cereal, detergent, soup, you name it.

Invented in Chicago in 1896 by German immigrant brothers Frederick and Louis Rueckheim, Cracker Jack starting coming with a prize in 1912, and by 1916 Sailor Jack and his dog Bingo were appearing on the box.

Here’s how I remember Cracker Jack — TV commercials with Jack Gilford and a box with delicious candy coated popcorn (as in molasses and caramel) and peanuts (but never quite as many peanuts as you wanted) and a small toy prize in an envelope. Sometimes my memories linger on the large box, which sold for a quarter, known as the “Pass-Around Pack,” which contained many more peanuts.

The prizes were, of course, the best part. Here’s a link to the website of C. Carey Cloud, who designed hundreds of prizes for Cracker Jack.

And you can see a lot of the metal prizes (yes, metal!) that were given away in those little envelopes on the website of collector Larry White.

But now there really are no more prizes because Cracker Jack announced last month (in a way, of course, that is designed to make it seem as if they’re giving you more instead of less) that what you will get in your bag of Cracker Jacks is a QR code. Let’s just have the company itself shovel its own bullshit:

“The Cracker Jack Prize Inside has been as much a part of the nostalgia and love for the brand as the unforgettable combination of caramel-coated popcorn and peanuts,” said Haston Lewis, senior director of marketing, Frito-Lay. “The new Prize Inside allows families to enjoy their favorite baseball moments through a new one-of-a-kind mobile experience, leveraging digital technology to bring the iconic Prize Inside to life.”

No thanks. And you’d think the guy would know what coats the popcorn ... the molasses is what makes it taste so good.

Abrupt Segue One: Perhaps the coolest prize of all, at least for me, was the Sailor Jack Magic Set that Cracker Jack made available in the early 1970s. Obtaining it required three Cracker Jack box tops and $1. Off into the U.S postal system they went and, after an agonizing four to six weeks of waiting, the humble box arrived in the mail.

It contains three tricks that were simple enough for a kid to learn and successfully perform; a membership card for Sailor Jack’s Magic Club; and an instruction booklet that not only explains the three tricks but (even more intriguing to the child) an advertisement for eight additional tricks, each of which cost between $2 and $5 and requiring three more box tops. That’s a total of 27 box tops and $27! As a child it all seemed mysterious and magical. As an adult it’s quite obviously just a way to get kids to eat a ridiculous amount of Cracker Jack and contemplate “borrowing” money from their unsuspecting parents.

Abrupt Segue Two: One of magician Michael Weber’s most famous tricks is borrowing a ring from a woman in the audience, making it totally and completely vanish, and then reaching into the inner left breast pocket of his sport jacket and taking out a sealed box of Cracker Jack. He opens it and hands it to the woman, asking her to fish out the envelope containing the prize. It, too, is sealed. When she rips it open her ring is inside. Astounding trick.

I am now going to eat that box of Cracker Jack seen in the photo above, and enjoy my candy-coated popcorn, peanuts, and a prize, because that’s what you get with Cracker Jack.