Shadow Regulation: the secret laws that giant corporations cook up in back rooms 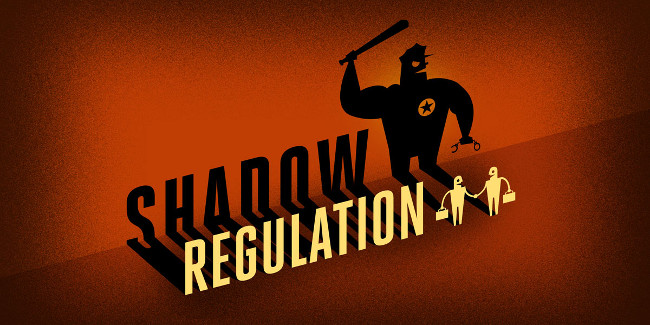 The winner-take-all economy has turned virtually every industry into a cartel (four record labels, two cable companies, two phone operating systems, etc) who operate without fear of competition regulation, allowing representatives of a few companies to gather in closed-door meetings to cook up operating agreements that end up having the force of law.

For example, the major US ISPs and the major US entertainment companies have agreed on a six-strikes "Copyright Alert" system that could disconnect you and your family from the internet without a trial or a chance of appeal; major US tech companies have agreed to a "hate speech code of conduct" that the EU cooked up without consultation with the people outside of the EU who now live under those rules; major domain name registries have given the MPAA the power to confiscate domain names on their own say-so; and payment processing giants have agreed to cut off people accused of hosting infringing content, without any legal proceedings or findings of fact.

EFF calls these "Shadow Regulations," and has launched a new campaign to get them into the open, mapping "some key instances of Shadow Regulation that exist at various levels of the Internet ecosystem where content and user behavior can be effectively blocked and controlled."

Speech on the Internet requires a series of intermediaries to reach its audience. Each intermediary is vulnerable to some degree to pressure from those who want to silence the speaker. Even though the Internet is decentralized and distributed, "weak links" in this chain can operate as choke points to accomplish widespread censorship.

The Internet has delivered on its promise of low-cost, distributed, and potentially anonymous speech. Reporters file reports instantly, citizens tweet their insights from the ground, bloggers publish to millions for free, and revolutions are organized on social networks. But the same systems that make all of this possible are dangerously vulnerable to chokeholds that are just as cheap, efficient, and effective, and that are growing in popularity. To protect the vibrant ecosystem of the Internet, it's crucial to understand how weaknesses in the chain of intermediaries between you and your audience can threaten speech.

Each of the links above represents a link in the chain of intermediaries that directly facilitate or indirectly support speech on the Internet. Click the names of the links to learn the role that these intermediaries play, and how and why they may be targeted.