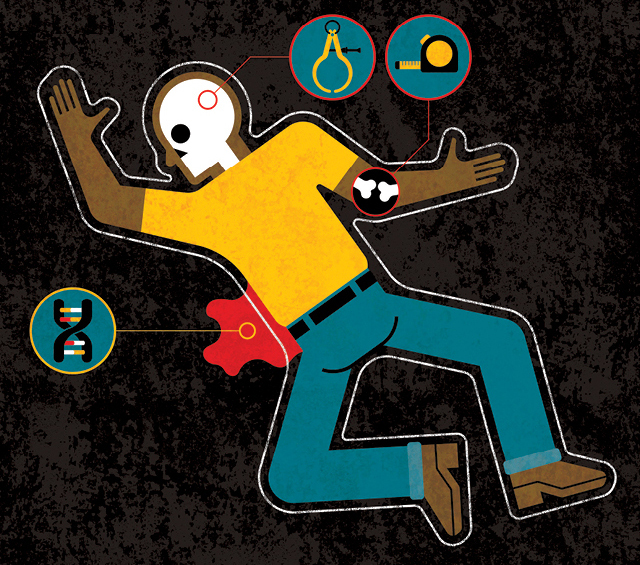 Here's a fascinating story about advances in forensic anthropology based around a creepy case of an archaeologist who had several open coffins full of human remains in his home. He said they were all legally taken from ancient Guatemalan sites, but new forensics methods showed that some of the bones were pretty new and of different races than the archaeologist claimed.

Lindsay Trammell was given the case because archaeologist Gary Rex Walters had previously been accused of stealing bones from a historic African American cemetery. As she pieced the remains together, it was clear they were from different times and places. "Trammell sent samples to Cris Hughes of the University of Illinois at Urbana-Champaign and Chelsey Juarez of North Carolina State University (NCSU), who performed genome sequencing and isotope analysis."

Trammell sent small bone and teeth samples from 10 of the crania found in the archaeologist’s wooden coffins. Of those, Hughes took subsamples from six and sequenced hypervariable region 1 (HVR1) of the mitochondrial DNA, which can help determine an individual’s haplogroup. “To jibe with [the archaeologist’s] story, I would have to see something that was a Native American haplogroup,” Hughes says. Of the four samples that yielded sequenceable DNA, three did have HVR1s consistent with Native American ancestry. However, one sample’s HVR1 placed the mitochondrial genome within West African haplogroups, suggesting that not all of the remains in the wooden coffins were from Guatemala after all. “Some of those materials in there were basically raising a red flag and were not consistent with his story,” Hughes says.

Includes a terrific infographic by Jude Buffum in a separate article explaining the analysis.

Yandex is Russia's answer to Weibo, an everything-under-one-(semi-state-controlled)-roof online service, and its answer to Alexa is Alisa.