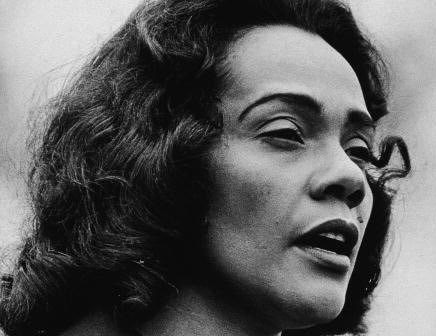 “She was warned. She was given an explanation. Nevertheless, she persisted,” said Mitch McConnell about why Republican senators basically told Warren to shut up.

Perhaps the good Senators from the party of Trump will do themselves a favor and Google the phrase, “Streisand Effect.”

The letter is here in full, embedded below, and is hopefully about to be shared and read aloud in many other places.

Here is Senator Elizabeth Warren reading Coretta Scott King's words on Facebook Live, after Republican Senators voted to take away her right to speak. Warren's Facebook Live reading of King's letter has already topped 1.1 million views at the time of this blog post you're reading. “#LizSpoke.”

Here is the letter written by Coretta Scott King letter on Jeff Sessions the GOP doesn't want you or Elizabeth Warren to read.

The suggestion that reciting the words of the great Coretta Scott King by @SenWarren is an attack on a Senator is outrageous. #LetHerSpeak

Whatever ur politics, it's amazing that 100,000+ Americans are listening online to a judicial proceeding.

Had C-SPAN2 on in background, happily ignoring all of it, until objections began. Reaction was mostly people who weren't watching at all. https://t.co/Koxht1Qrlw

After being rebuked by Republicans for trying to read Coretta Scott King’s letter, @SenWarren talked to @maddow. https://t.co/JN4C2hMCgx

GOP: "Milo Yiannopoulos has a right to speak!"

President Trump made a big deal when he kept Dr. King's bust in the Oval Office, now Dr. King's widow's words are not allowed in the Senate!

This is unreal. Senate Republicans have ruled that any Democrat that criticizes Sessions' record will be stripped of the right to speak. https://t.co/At5fqUkVWF

Thing is, nobody would have batted an eye at Warren’s speech had McConnell not shut her down. Streisand effect.

Silencing Elizabeth Warren for breaking an arcane senate rule was simply a more genteel way of telling a woman to sit down and shut up.

Male chauvinists aren't even effective anymore. If you want to shut a woman up, keep her on @cspan. Don't send her to Facebook live. https://t.co/iCX2BxPei5

2017: when senators who voted to give coretta Scott king a congressional gold Medal censure a member of the senate for reading her words.

another thing this episode shows is how leader-centric the Senate is. No one on the GOP side told McConnell, don't do this?

Sessions was too racist to be a federal district court judge 30 years ago. Now he may be our attorney general. https://t.co/MY9Rr6rVke