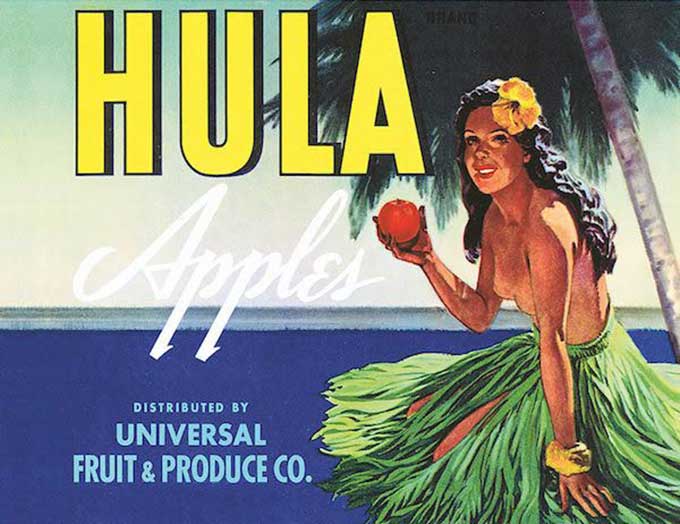 Over at Collectors Weekly, Lisa Hix has just written an incredibly in-depth history of the hula, from its roots as a sacred dance to its kitschy personification as a dashboard doll. For her piece, Hix spoke with Constance Hale, a hula dancer herself, whose new book, The Natives Are Restless, focuses on authentic, 21st-century expressions of the hula.

In his journal, Captain Cook described the Hawaiians’ hula: “Their dances are prefaced with a slow, solemn song, in which all the party join, moving their legs, and gently striking their breasts in a manner and with attitudes that are perfectly easy and graceful.”

In The Natives Are Restless, Hale explains, “To be sexually adept and sensually alive—and to have the ability to experience unrestrained desire—was as important to ancient Hawaiians as having sex to produce offspring. The vital energy caused by desire and passion was itself worshiped and idolized.”

Cook and his men—and the merchants, whalers, artists, and writers who followed—mistook the hula’s sexually charged fertility rituals as a signal the Hawaiians’ youngest and loveliest women were both promiscuous and sexually available to anyone who set foot on their beaches. In her 2012 book Aloha America: Hula Circuits Through the U.S. Empire, historian Adria L. Imada explains how natural hospitality of “aloha” culture—the word used as a greeting that also means “love”—made Hawaiians vulnerable to outside exploitation. To Westerners, the fantasy of a hula girl willingly submitting to the sexual desires of a white man represented the convenient narrative of a people so generous they’d willing give up their land without a fight.

Contrary to this fantasy, the people populating the eight islands of the Hawaiian archipelago weren’t so submissive. In fact, the chiefs reigning the islands of Mau‘i and Hawai‘i had been attacking and raiding each other since the 1650s. But contact with the Western world was something they were unprepared for, and the introduction of Western diseases like smallpox and measles began to weaken and decimate the islands’ native populations.