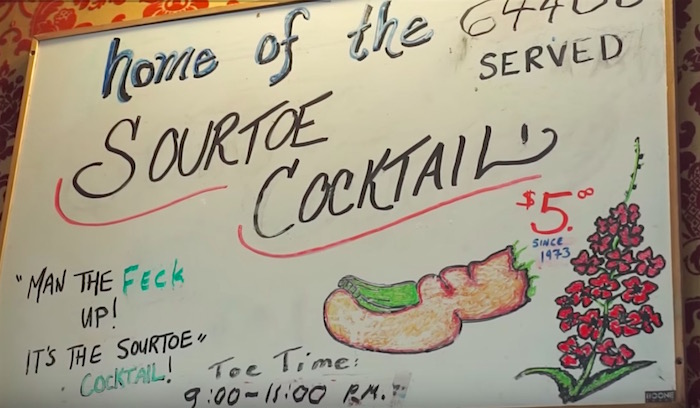 I don't know what's weirder – the fact that a bar uses an amputated human toe as a cocktail ingredient, or that the toe was stolen. But both happened at a saloon in Canada's Dawson City, Yukon.

The Sourtoe Cocktail Club started in 1973 at Dawson City's Downtown Hotel. To join the club, you need to down 1 oz of hard liquor – preferably Jack Daniels – with a severed toe bobbing in the glass. To earn a membership certificate, you need to make sure the toe touches your lips. But last week the toe was stolen.

"We are furious," said Terry Lee, the hotel's "Toe Captain" in a news release. "Toes are very hard to come by."

And where do these toes come from? The first one – the one that inspired the original Sourtoe Cocktail – was a toe from the prohibition era. To avoid gangrene the toe was chopped off and stored into a mason jar. Some 50 years later the toe was discovered and voila, the Sourtoe was born. Since that toe, however, others have been donated from people who have had to part for whatever reason with one of their digits.

The theft of the toe is a big loss, said hotel manager Geri Coulbourne. She says the toe was donated by a man who had to have it surgically removed, then cured in salt for six months.

"This was our new toe, and it was a really good one. We just started using it this weekend," she said.

The hotel says the suspect is from Quebec and had earlier boasted about wanting to steal the toe. Lee says the man reportedly coaxed the bartender to serve him the drink after the nightly 9 p.m. to 11 p.m. "Toe Time."

"One of the new staff served it to him to be nice. And this is how he pays her back. What a low life."

And what universe are we in?