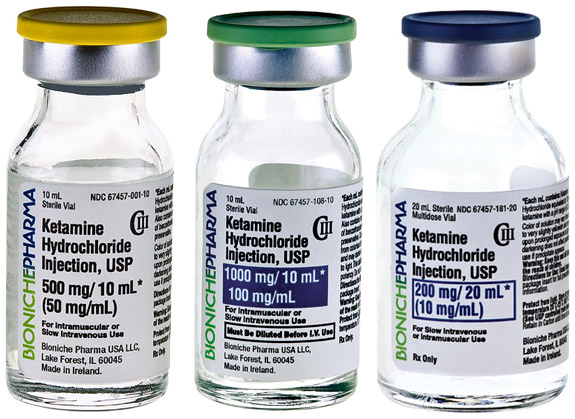 Ketamine is a short-acting dissociative anesthetic commonly used on animals and sometimes people. Of course it's also beloved by many psychonauts for its unusual dreamlike or "out of body" psychedelic effects. While Ketamine has been shown for years to help treat depression, anxiety, and obsessive-compulsive disorder in adults, researchers at Yale School of Medicine now report that it has great promise as a fast-acting intervention for children in crisis. From Scientific American:

It was less dramatic to watch than I expected, but the kids were definitely high. There was a lot of giggling involved, and they often said that they felt like time was changing and that their bodies felt ‘funny’ and sometimes numb. Nicole, (a suicidal 14-year-old,) admitted, “I’m not gonna lie. I like the feeling of it.”

Perhaps more dramatic than the trips themselves, which happened in a carefully controlled procedure room with a psychiatrist and anesthesiologist ready to intervene if needed, were the interviews that came after. I could see the weight of depression lifted from these patients within hours. Adolescents who were previously ready to end their own lives became bright and hopeful. Psychiatry has never seen a drug intervention so powerful and fast acting. While most anti-depressants take weeks to work and offer modest improvement, ketamine offers dramatic improvement in less than a day...


Dr. Michael Bloch, Yale child psychiatrist and principal investigator of several controlled trials for ketamine for adolescents, points out that the drug is only used for select patients who have severe mental health problems that have not responded to other medications. The infusions are provided in a clinical trial setting, where doctors collect efficacy data and carefully watch for side effects. For each of his patients, the theoretical risks of ketamine are carefully weighed against the risk of suicide. For Nicole, who seemed likely to die from suicide, the calculus was not difficult.