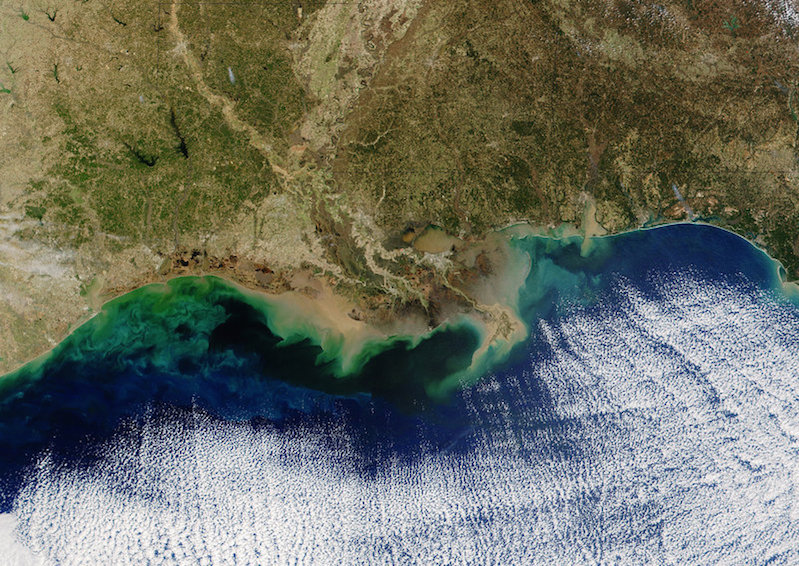 Despite common media depictions of small picturesque farms, the reality is that just five companies produce most meat in the United States, under a highly industrialized and centralized factory-farm system. While most animals were produced on small farms decades ago, large, industrial factory farms now control the market: anywhere from 50 to 75 percent of meat markets are now controlled by just four companies each, with Tyson controlling over 20 percent of the chicken, beef and pork markets.5 Industrialized farming confines thousands of hogs, chickens, and cattle in tight factory-like spaces,ii and concentrates corporate control over production standards, especially for hogs and chickens.

America’s largest meat company, Tyson Foods, stood out for its expansive footprint in all the regions suffering the worst pollution impacts from industrial meat and feed production. Tyson produces one out of every five pounds of meat produced in the United States, and owns brands like Jimmy Dean, Hillshire Farm, Ball Park, and Sara Lee, in addition to selling to fast food retailers like McDonalds. The company is consistently ranked among the top polluters in America, although Tyson’s new CEO has declared that a focus on sustainability will be at the center of the company’s future plans. The report found:

• Tyson is the only meat company with major processing facilities in each of the states listed by the USGS as contributing the highest levels of pollution to the Gulf;

• Tyson and Smithfield have the heaviest concentration of meat facilities in those regions of the country with the highest levels of nitrate contamination;

Correction: This post has been revised to reflect that Mighty Earth identified meat industry suppliers, specifically factory farming, not meat processing factories, as a key polluter. We regret the error. Tyson Foods responded in part, "We share this group’s concern about the environment but disagree with its misleading characterization of our company. Tyson Foods is not in the business of raising the crops and we own very few livestock farms." They also pointed to a meat industry trade group response
.