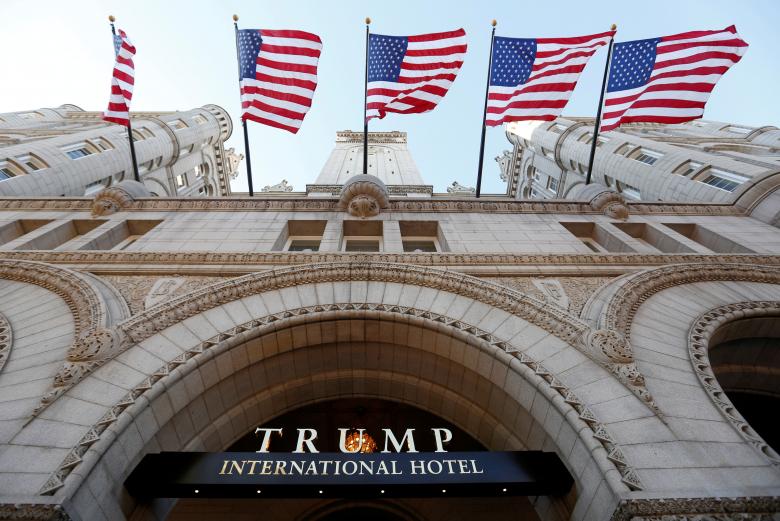 President Trump and his family own, operate, and profit bigly from the most expensive hotel in the nation's capital. Driving the inflated rates at the Trump International Hotel in Washington: favor-seekers from around the world know to stay there when they hope to curry favor with Trump's government.

Donald Trump's company turned a $1.97 million profit at its opulent Trump International Hotel so far in 2017, dramatically beating its expectations and giving the first hard numbers to critics who charge that Trump is profiting from his presidency.

The Trump Organization had projected that it would lose $2.1 million during the first four months of 2017 as it established a new hotel and convention business in the nation's capital, according to newly released federal documents.

Instead the hotel, with its namesake in the White House down the street, is already turning a hefty profit and charging more for its rooms than most or all of the city's other hotels.

The $4.1 million swing from projected losses to profitability represents a 192 percent improvement over what the Trump family planned to make when the company opened the hotel in the fall.

Driving the profits are the extraordinary prices guests have been willing to pay for rooms, including members of Trump's Cabinet who have stayed or lived there, as well as big spending on food and beverages in the meeting areas, bar and restaurant — spots frequented by members of Trump's inner circle and other Republican leaders.

This year, guests have paid an average of $652.98 a night to stay there, beating the company's expectations by 57 percent, according to documents posted online recently by the General Services Administration.

PHOTO: Reuters. Flags fly above the entrance to the new Trump International Hotel on its opening day.