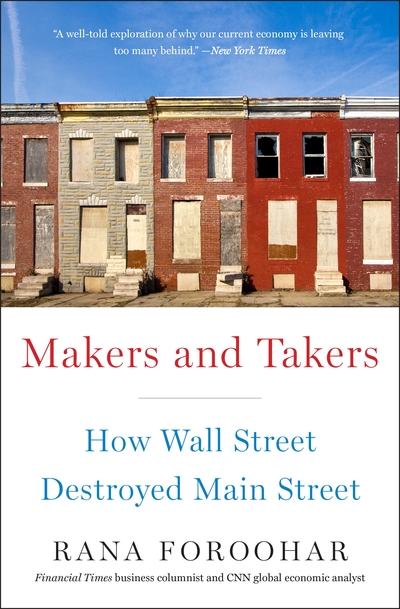 The soaring rents are the results of a cornered market: the houses in San Bernardino were snapped up by Invitation Homes, a division of the Blackstone Group, the world's largest hedge fund. Blackstone is at the center of a national epidemic of high rents, and is financializing tenants by creating bonds based on their rent payments.

The story is told in Rana Foroohar's Makers and Takers: How Wall Street Destroyed Main Street, just publishing in paperback, in which the Financial Times associate editor describes the way that financialization undermines productive economic activity and replaces it with casino capitalism to the benefits of financiers and the detriment of the world.

Private equity investors have become the single largest group of buyers in the residential housing market, purchasing $20 billion worth of steeply discounted properties between 2012 and 2014 alone and reaping huge rewards as housing prices have slowly risen from their troughs. Blackstone, the biggest of the big private equity firms, with more than $330 billion in assets under management, has become the largest investor landlord in the country, with a portfolio of 46,000 homes and other properties that generated $1.9 billion worth of income in 2014, making real estate the largest profit center for the firm. Blackstone’s CEO, the infamous Wall Street titan Stephen Schwarzman, has called the firm’s move into the rental business in places like the Inland Empire a “bet on America.”

To be more precise, it’s a bet on the fact that fewer Americans can afford, in the wake of the financial crisis, to own a home. Thus an increasing number will be forced to rent from a Wall Street investor like Blackstone. Indeed, private equity’s rush into real estate goes some way toward answering one of the most perplexing economic questions of late: If housing is back, then why is the percentage of people who own homes in our country at a twenty-year low? Home values began rebounding from their post-financial-crisis trough in the beginning of 2012, and by July 2015, home sales had increased to their highest pace in eight and a half years. But the percentage of Americans who can call themselves homeowners is still declining from its peak in 2004, and many experts expect it to fall further as credit continues to be tight, young people struggle with higher-than average levels of unemployment, and baby boomers begin moving into retirement housing.