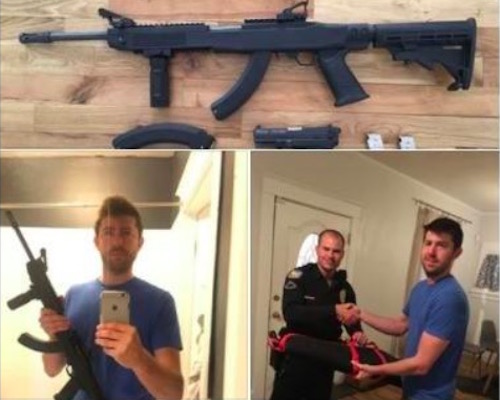 A Phoenix man who posted pictures on Facebook giving his guns over to local police says he received multiple death threats after the post went viral. The original post, which has since been deleted, showed 36-year-old Jonathan Pring posing with his tactical rifle, then handing a bag of guns to the officer.

Pring, a dual citizen of the US and Britain, said he wanted to make a change after the shooting deaths of 58 people in Las Vegas on October 1. The post is still circulating around Facebook, garnering more threats from people who say Pring should be shot and some who shared his home address to the social media site, according to the Phoenix New Times.

Pring posted about how his views on guns have changed since going viral, but said he still believes “common sense gun controls” could have stopped the Vegas shooting.

“I made a decision to hand over my guns,” he posted. “It is my personal opinion and it is my right. However, in light of my new found fame I am reminded that guns are a valued part of the American story.”

“Many of the negative comments I received mentioned 'bad guys.' I ask you, if you are the person sending me threatening and hateful messages simply for expressing my 1st Amendment rights, perhaps it is you who is the bad guy?”

Pring’s guns are likely to be resold due to an Arizona state law forcing local police departments to resell turned-in firearms, instead of destroying them.