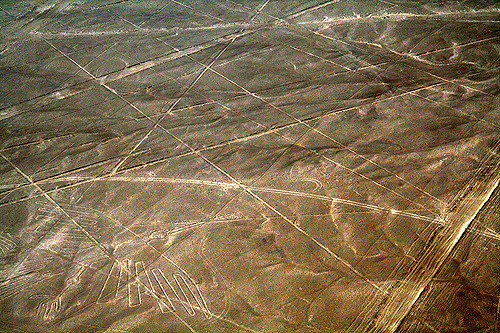 We can't have nice, ancient things.

Peru's Nazca Lines have so much historical and cultural significance that the United Nations declared the Peruvian coastal plains where they're located to be a World Heritage Site back in 1994. Created somewhere between 500 B.C. and 500 A.D., they're one of the finest examples of  ancient geoglyphs still intact today. Depicting plants, animals, culturally significant figures and yes, maybe space aliens, the drawings, which take up 425 square kilometers of space, are so massive that they can only be fully appreciated when seen from the air. They're a beautiful mystery, carved into the face of the earth generations ago; an echo of a vibrant past.

So of course, someone drove a semi-truck through them.

According to Andina, a news outlet owned by the Peruvian government, the driver of the truck, Jainer Jesús Flores Vigo, left a nearby highway, steering his rig 50 to 100 meters into a nearby section of the geoglyph and left deep wheel ruts in it before coming to a stop. The New York Times says that Vigo faces a criminal charge of "attack against cultural heritage" for his off-road adventure. Thankfully, only a small section of the Nazca Lines was damaged, and the Peruvian Government says that they'll be stepping up surveillance efforts in the area in an attempt to maintain the integrity of the site.

Why anyone would decide to build a highway through such a priceless link to our past, making incidents like this possible, is anyone's guess.

NASA Earth Observatory’s Lauren Dauphin captured this lovely portrait of the Marree Man, a 2.2 mile (3.5 kilometer) tall illustration of a person etched into a South Australian plateau, southeast of Lake Eyre. A pilot first spotted Marree Man in 1998 but to this day nobody knows for sure who created the geoglyph. While an […]